Good news from Slovakia: Retired partisan played for pensioners in his garden 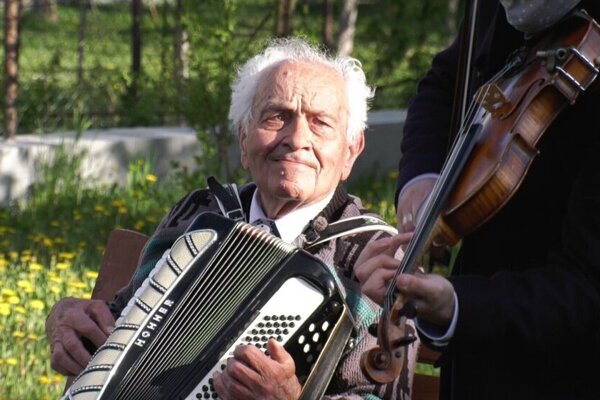 92-year-old Vladimír Strmeň, who participated in the Slovak National Uprising (SNP) at the end of World War II, decided to collect money for retirement homes in his hometown of Banská Bystrica and its surroundings.

The garden concerts at his house in Radvaň took place three days in a row, and could be followed on Facebook, the MY Bystrica regional website reported.

He took inspiration from British veteran Tom Moore, who collected more than £28 million for medical staff through a campaign. He did so by going through his 25-metre-long garden on special stilts, earning him respect.

“I really admired Tom Moore,” Strmeň told MY Bystrica. “But my knees really hurt, so I couldn’t walk through my garden. So I decided to start playing in my garden.”

Strmeň at first wanted to do his garden concerts every Friday until he collected €5,000. The fact is that he managed to collect €15,262 in the three days, as the reporter of the private broadcaster TV JOJ informed him.

“He’s a person that radiates goodness and despite his advanced age, he still wants to help others,” reporter Katarína Kováčiková said, as quoted by MY Bystrica.

Before he started his garden concerts, he used to play and sing in retirement homes in Banská Bystrica, which he cannot do now due to the coronavirus pandemic.

A native of Staré Hory near Banská Bystrica, Strmeň had a hard childhood. Since his family was poor, he was sent to a home where children lived in very modest conditions.

While fighting near Turčianske Teplice in northern Slovakia, he was seriously wounded. However, he was transferred to the hospital in Banská Bystrica, where he underwent surgery performed by prominent surgeon Daniel Petelen, MY Bystrica wrote.

He recovered thanks to his inner strength, the website added.