A greater fall was prevented by the higher price of fruit and vegetables.

The annual rate of inflation slowed down in April to 2.1 percent in total, compared to 2.3 percent in March. It thus dropped to its lowest level since late 2018.

“The April slow-down was slightly lower than we expected as it was hindered by the dynamic rise in food prices,” Ľubomír Koršňák, analyst with UniCredit Bank Czech Republic and Slovakia wrote in a memo.

On the other hand, it was pulled down by cheap natural oil. The slight slow-down was also reported as caused by demand inflation, but this might have been affected by closed shops, he added. 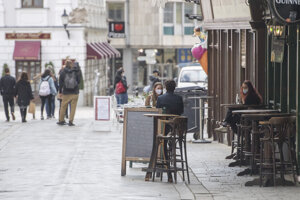 In monthly terms, consumer prices remained unchanged in total, according to the Statistics Office.

Food up, oil down

The Statistics Office also admitted that the consumer price index in April was significantly affected by the situation associated with the coronavirus crisis. The traditional field price survey was influenced by the closure of outlets and service operations and the cessation of field surveys. Uncollected prices were replaced by prices from other sources, e.g. websites, telephone and e-mail inquiries and data scanner information (food, alcoholic beverages) of retail chains have been used. A portion of the uncollected prices was obtained by imputation, i.e. using the month-on-month index from the previous year (April 2019 vs. March 2019).