Battle against coronavirus almost over, a different kind of “war” about to break out

It has been an eventful week for the judiciary and for the human rights defender. 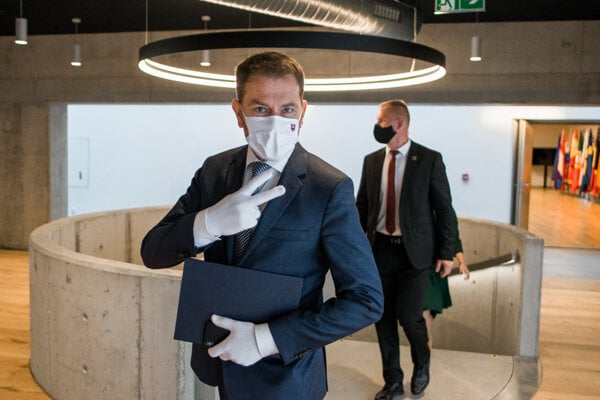 PM Igor Matovič is pleased with the numbers from testing, his decision about school is now the most-awaited news. (Source: Government's Office via SITA)
Font size:A-|A+34

See our graph for the latest statistics of the coronavirus in Slovakia.

Smart quarantine is still not in place as the Constitutional Court partly suspends the respective law. With the war on COVID-19 over for now, some MPs are inciting a new battle. Meanwhile, the judiciary has had an eventful week.

Slovakia to attempt a smart quarantine

When Slovakia’s new government took over a few weeks after the pandemic arrived and closed the country borders, schools and shops, the changes to the Telecommunications Act that should allow authorities to trace back the contacts of the infected using data from their mobile phones was one of the first things the new parliament voted on. Nearly two months later, Slovakia has made no attempt at introducing some kind of smart quarantine, despite pledges that they would do so within the last week.

Instead, the Constitutional Court has suspended some parts of the Telecommunications Act, also known as Lex Corona, reasoning that they were too vague and insufficient in providing guarantees that the personal data that the authorities would handle when tracing back people’s mobile phones would be properly protected. The motion against the law was filed by the opposition Smer and its leader Robert Fico was quick to label it their first victory in opposition.

The government, however, proceeded to pass a law in a fast-tracked procedure on Friday that introduces the use of a mobile phone app through which the authorities will be able to monitor people’s movements on a voluntary basis. This is an alternative to isolation in a state facility, but it appears the authorities will tip off those who will be able to use it. The system, the details of which have not been revealed, should be put into operation as of today, May 18.

The past week has produced some very good news from Slovak scientists, who developed a brand new Slovakia-made COVID-19 test which was officially registered. The scientists donated 100,000 of the tests to the country.

A properly functioning quarantine system together with an elaborate and targeted system of testing is seen as essential for coping with a potential second outbreak of the coronavirus in Slovakia, which epidemiologists are clearly saying will come. It is also seen as a good alternative to state quarantine, which the authorities admit is struggling with capacity requirements and other problems. In addition, state quarantine has been heavily criticised for potential human rights and freedoms breaches, including by ombudswoman Maria Patakyova.

Ombudswoman report sets stage for another kind of war