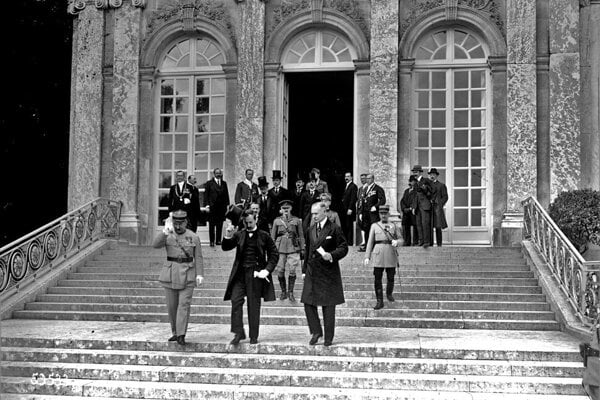 June 4, 1920 was a black Friday for Hungary. At 10 a.m., all bells started tolling in Budapest, and mourning sirens sounded. People stopped working for a while. Thousands of protesters gathered in the streets. The event that provoked anger and disappointment in one nation, meant hope of a better tomorrow for other nations. This is how the geopolitical cards were dealt in central Europe.

The French King Louis XIV had a smaller castle built in the park near his seat of Versailles in the second half of the 17th century. After it was built, they named it the Big Trianon.

Trianon became a symbol for one nation in central Europe. Here, where Emperor Napoleon also lived for a while, the peace treaty was signed on June 4, 1920, between Hungary and the victorious powers of World War I and their allies. The treaty definitively sealed the fate of Hungary and confirmed new borders. More than two thirds of the territory of pre-war Hungary went to Czechoslovakia, Romania, the Kingdom of Serbs, Croats and Slovenians. Smaller parts went to Austria, Poland and Italy.

The population of 21 million inhabitants of the Hungarian Kingdom shrank to 7.6 million in postwar Hungary. More than 3 million Hungarians found themselves living on the territory of neighbouring countries.

Hungary still remembers Trianon as a traumatising event. This is also thanks to politicians, who tend to use (and exploit) Trianon in political campaigns. Hardly any historical event is remembered through that many memorials in the country. Many Hungarians consider it treason and a dictate forced on them. The current ruling powers see painful Hungarian 20th century history as fertile ground for PM Viktor Orbán to cultivate nationalist sentiments on.

One state, one nation, one language