Reasons include costs and digitalisation. 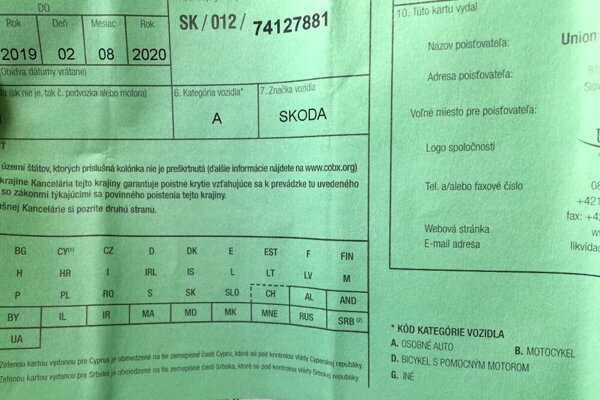 Drivers should prepare for another change concerning the card confirming that they have compulsory car insurance. Currently, they have the so-called green card and can use it both in Slovakia and abroad.

This will change in July, and the card will possibly be black and white, the Index magazine reported.

Second change in a short time

Until October of 2019, drivers received two cards from the insurer after paying the compulsory insurance. The white card was valid only in Slovakia, while the green card was used when travelling abroad.

However, after several complaints from drivers who considered it redundant, the rules changed and they started receiving just the green card.

Now, the card will change colour again. The shift to white and black results from the agreement of the System of Green Card members.

“Printing on green paper and the obligation to use this colour limits digital solutions, creates costs and burdens the environment,” Beáta Lipšicová, spokesperson of the Uniqa insurance company, said about the change, as quoted by Index.

“We would appreciate the possibility of sending this document to all clients electronically, which is not an only more economic, but a more ecological solution,” Katarína Kukurová, spokesperson of Generali, told Index.

Drivers will now receive either a green or black-and-white card until July 30, 2021. The police will accept both. After this date, only the black-and-white version will be used.

Uniqa wants to release green cards in the original colour also after July 1, until they spend the stocks of pre-printed forms.

Generali, on the other hand, wants to start to print the cards in black and white from the very beginning. They will also gradually change the cards of all their existing clients.