Having survived countless lightning strikes, Slavín gets a makeover 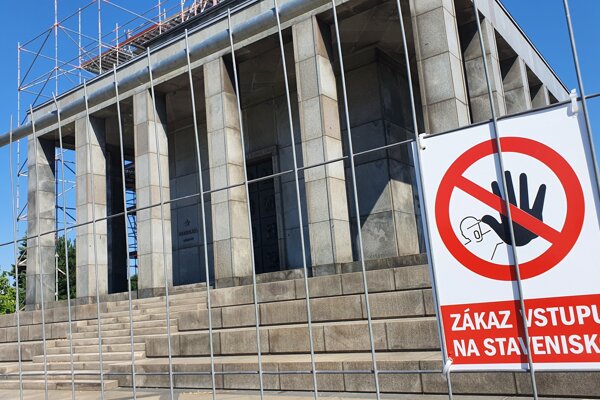 “Just like a soldier on the front line,” said Boris Šramko, as he described what the seven-metre-high bronze statue of a soldier at the Slavín war memorial towering over Bratislava has had to face from the elements since it was unveiled in 1960.

Speaking to journalists on July 10 as he outlined major restoration work which has started on the landmark, the director of Marianum, the municipal organisation which runs all civilian and military cemeteries in Bratislava, said experts had estimated the soldier had been hit many thousands times by lightning since it was unveiled in 1960.

The flag which the soldier holds in his right-hand has a lightning rod incorporated into it and the strikes have left the golden star on its upper end pock-marked and spotted.

But not for long.

The star, along with the rest of the soldier and the granite panelling of the column it stands on, is to be restored as part of complex reconstruction work – the first since the 1970s - of what is the largest war memorial in central Europe.

Built to mark the liberation of Bratislava and western Slovakia by the Soviet army at the end of WWII, Slavín is one of the Slovak capital’s most recognisable landmarks.

Almost 7,000 Soviet soldiers are buried there, and it has been visited by foreign leaders since it was opened, including in 2005 by Russian President Vladimir Putin. 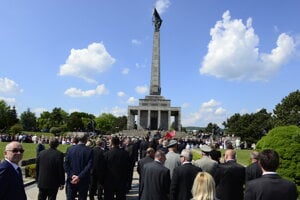 Related articleSlavín WWII memorial will get a facelift Read more
Sorry, you have just exceeded the allowed number of devices
This subscription grants access to the locked content of Spectator.sk and SME.sk for only one person through a maximum of three different devices or browsers.
To continue reading the article on this device, please update the list of devices in the profile settings.
Administer devices
You can read everything about device settings here.