Kuciak murder trial culminates: A convict points at Bödör, accuses him of fabricating a cover story

Businessman close to Smer, Norber Bödör, is currently in custody for another case. Andruskó points a finger at him and says he has covered up the murder. 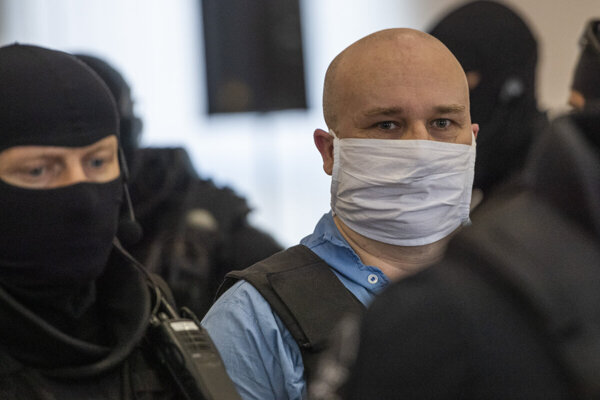 The so-far known results of the investigation of the murder of Ján Kuciak and Martina Kušnírová suggested Norbert Bödör, a Nitra-based entrepreneur with ties to the Smer party, was helping Marian Kočner follow journalists and later influence courts or the investigation of various cases.

Miroslav Marček, Tomáš Szabó, Alena Zsuzsová, and Marian Kočner have been charged with the murder of Ján Kuciak and Martina Kušnírová.

Andruskó has cooperated with the police since he was detained. Miroslav Marček has also confessed, and confirmed he was the shooter.

They are both testifying against Szabó, Zsuzsová, and Kočner, who deny the charges.

The trial continues on Thursday, July 23. It is possible that the court will wrap up the testimonies and proofs on that day, and will proceed with the closing speeches.

Following the closing speeches, the court will announce the verdict.

On July 20, however, the convicted middleman Zoltán Andruskó told the Specialised Criminal Court senate dealing with the Kuciak murder trial that Bödör also played a role in the murder case.

"I would like to say something I have not said yet because I was afraid," Andruskó started his testimony.

Bödör had known about the steps of the police before the quartet who now face charges in the Kuciak and Kušnírová murder case, and he tried to make up an alibi for them, Andruskó said. He alleges Bödör was trying to find a fake murderer who would admit to having committed the deed, for a reward of €1 million.

The Kuciak family attorney Daniel Lipšic said he has heard about Bödör trying to mar the investigation.

"There was operative information like that, it is possible," he said, adding that he had no more information.

How Bödör sought a fake murderer