Slovakia has gained what it intended to, the Slovak delegation said after returning from one of the longest-ever EU summits. 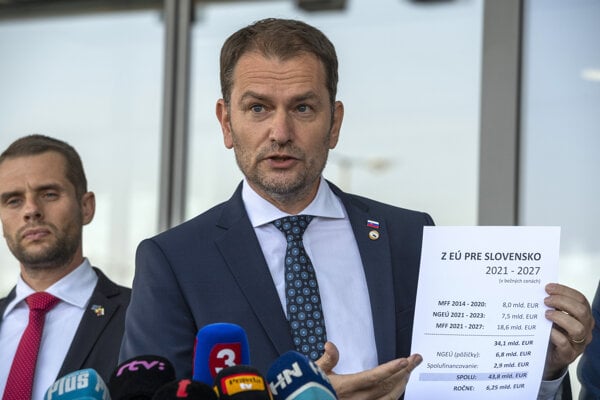 "It is not good news, it is brilliant news for Slovakia," Matovič commented on the deal the EU leaders have reached over the proposed recovery fund and the future EU budget in Brussels in the early morning hours on Tuesday. The result is a €1.82 trillion budget and COVID-19 recovery package, which encompasses €390 billion in grants and €360 billion in loans.

PM Igor Matovič said Slovakia has gained at the summit what it intended to.

Slovakia will get €7.5 billion from the Next Generation EU recovery fund. As for the budget, Slovakia has been assigned €18.6 billion to withdraw from 2021-2027.

Slovakia can also withdraw €8 billion of what is unabsorbed from the previous EU budget.

"We also have the possibility to draw loans amounting to €6.8 billion for a AAA rating, with an interest rate close to zero, that the European Union will borrow," Matovič said, as quoted by the Sme daily. Slovakia will have to start paying those loans in seven years time, Matovič said.

"I am glad an agreement has been reached in the end and that the EU is unified," President Zuzana Čaputová commented on Facebook. She called the aid for Slovakia "unprecedented". "To be able to sensibly use this aid, we need to join the best heads and prepare a very good plan. Our aim must be to not just spend the money, but also to invest it well into the development of Slovakia, also for future generations."

PM Igor Matovič echoed that sentiment during his press briefing at the Bratislava Airport after his return to Brussels. He said Slovakia now needs to come up with a plan on how to withdraw the money it has been assigned for the best benefit.

Investment Minister Veronika Remišová (Za Ľudí) has also praised the country’s achievement at the EU summit, citing that Slovakia will obtain the largest amount of EU funds in the coming years after Estonia and Latvia, the TASR newswire wrote.

However, Smer chair Robert Fico said the winners of the talks are Czechs, Hungarians, and the so-called F4 group (i.e. Denmark, Austria, Sweden and the Netherlands). The Czech Republic and Hungary will, for example, receive more money than originally proposed.

Slovakia will actually receive less than originally proposed, he added, as reported by the SITA newswire.

Although Slovak MEPs have welcomed the new agreement on the EU budget and economic recovery plan, they said the deal is far from perfect. Europe’s ‘frugal four’ – the Netherlands, Denmark, Austria, and Sweden – are the winners of the new financial arrangements, said MEP Robert Hajšel (Smer), as reported by SITA.

Another MEP, Michal Šimečka of Progressive Slovakia (PS), said the deal is “much better than we could have imagined a few months ago.” Slovakia now has a chance to transform from an assembly hall to a green and innovative economy, he added.

“It is the government’s obligation to grasp it,” he said, as quoted by SITA.

No additional burden for state budget

Slovenská Sporiteľňa analyst Katarína Muchová considers it to be good news that the co-financing will be only 15 percent, and not 25 percent as proposed.

“The burden on the state budget will not increase as a result,” she wrote in a memo.

As the European Commission does not have the agreed sum at its disposal, it will have to borrow money on the financial markets. The EC is aiming at increasing the volume of its income through the introduction of environmental and digital taxes in the coming years. The specific proposals are to be introduced in the coming three years, she commented.