Do not try this at home, I am a professional tourist (from our archive)

Here‘s what can happen while hiking from Banská Štiavnica to Sklené Teplice. 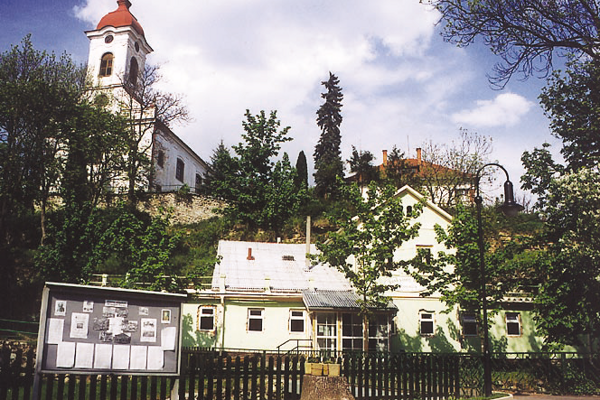 This is an article from our archive of travel guides, Spectacular Slovakia. We decided to publish it for our readers, making only necessary adjustments. Some of the writer’s observations from 2002 have changed, but much still holds true. For up-to-date information and feature stories, take a look at the latest edition of our Slovakia Guide.

Sometimes things go wrong. Sometimes they go right. And sometimes it all happens on the same day.

This point was made dazzlingly clear on a recent spring day in the hills between Banská Šiavnica and Sklené Teplice. A hike from the former mining town to the little spa village should be an easy three-hour trot through the Štiavnické vrchy hills. On the morning I went, though, the skies were threatening. ‘Oh, that’s fine,’ I thought gaily. ‘I’ll just bring a plastic bag to keep my camera dry.’

At the Červená studňa pass, 20 minutes above Štiavnica, it began to rain. Half an hour later the first lightning bolt split the sky, followed by the first peal of thunder. ‘Oh, that’s okay,’ I told myself, smiling idiotically as I slid my camera into its ‘waterproof camera protector’ (a Tesco shopping bag). ‘This will keep her dry.’

But while placing my expensive Cannon and two lenses into the bag, I poked my fingers through the plastic, thereby removing all the proof from its waterproof. And at that very moment, as I sat staring dumbly at what I had just cleverly accomplished, the downpour intensified. This was not going according to plan.

Fifteen minutes later I came to a grove of evergreens and sheltered from the storm. Fortunately, an inspection of my soaked rucksack showed my camera to be still operative, although I had somehow managed to break off a piece of one of my lenses. With nothing else to do, I sat down in the dripping canopy and waited.

An hour later I was still there. To the tune of heavenly drumming, I prayed for the rain to stop just long enough for me to get to Sklené Teplice, still well over an hour away. But it kept right on pouring down. Another hour later, shaking uncontrollably from the cold, I decided to chance it.

I jumped from the canopy and began running through the deluge. Soon after I came to a mysterious fork. Although there was a red arrow pointing the way, as far I could tell there was no trail. I explored several routes that somewhat resembled a path, but could find no red markers. So I dashed about in utter confusion for 30 minutes as the rain persistently fell in cold, driving sheets. At one point I stumbled upon a farm where two mangy dogs thought it would be ever so jolly to chase me through the mud, all the while making it quite clear by their tone of bark that I was not welcome on their turf and that unless I evacuated immediately they would gladly indulge in a taste of wet, shivering American tourist.

Finally, I found a path. But it was not marked. With the advancing dogs’ encouragement, however, I followed it. For the next 30 minutes I ran, until the path hit a paved road. It led to Sklené Teplice.

By now the rain had tapered to a drizzle, and things were beginning to look up. I walked along the paved road and soon noticed red trail markers - I had somehow found my way back to the path. Yes, things were definitely looking up.

But here’s the thing: these markers were always on the left hand side of the road. Always. Until, that is, a trail headed off up into the woods on the right. And there, directly next to this path, was a red trail sign marker. ‘Aha,’ I thought. ‘So this must be the way!’

After 20 minutes of labouring up a steep trail slippery with mud, however, I stopped and looked bewilderedly around the wet forest. ‘Wait a minute... I haven’t seen any more trail signs.’

Oh, those trail sign makers. Too clever to be understood, they had fooled me again. You see, while hiking in central Slovakia, I have learned that this is a game they love to play with me. When I need guidance, they withhold it. When the trail appears obvious, they throw in a curiously placed marker to confuse. Example: In the Sitno nature reserve, there is a straight trail bordered on both sides by impenetrable bushes. Yet there are three markers on three consecutive trees in a space of 20 metres. This in an area where, even if I’d wanted to, I simply could not have left the path. Then 20 minutes later comes a fork - and not a single sign. Over the next 100 metres there are three more forks, again with no guiding signs. After wasting an hour on what should have been a five-minute stroll, I finally hit on the right combination and found a trail marker after all those forks. It was as if they were testing my worthiness to advance (and I am often not worthy). So I’m used to this.

I turned around and went back down the hill, sloshing through the mud and chomping on a piece of gum while practising Slovak curse words under my breath. As I approached the street where the trail had come from, I bit my tongue. Hard. Howling in pain, I put my fingers to my mouth and drew them away spotted with blood. Stumbling about on the steep slimy slope, I staggered over a rock, flew through the air and landed face-first in a muddy pool by the road. Things were no longer looking up.

What’s more, I didn’t even suffer this indignity in solitude. A group of hikers on the road had seen this whole spectacle. So with nothing else to do, I jumped up, levelled a knowing gaze on them, and said confidently: ‘Nebojte sa, viem čo robím. Ja som profesionálny turista!” (Don’t be afraid, I know what I’m doing. I am a professional tourist!) Somehow, they were not convinced.

I checked the bus schedule to find, naturally, that my bus had just left and that the next departure wouldn’t be for two hours. So I went to a little pub, ordered hot tea, and started jotting down the day’s details in my notebook, lest I forget anything (not likely).

After an extended period of furious scribbling, I noticed that two older men had joined me at my table. Named Ján and Gabo, they were staring at me with that bemused look used by Slovaks when they encounter an American tourist wearing more trail than clothes (I know this look well). Our conversation went something like this:

“Christ, man. What the hell has happened to you? You’re all wet and dirty!”
“I know,” I lisped through my swollen tongue.
“You’re shivering!”
“Yeth. I know,” I repeated, wishing they would take their astute observations elsewhere.
“You’re going to be sick.”
“Yeth... I know.” These fellas were sharp.
“All right, now listen up. This is what you do. If you don’t do it, you will be sick. But if you follow our instructions, you’ll be fine. In fact, you’ll probably feel much better than you have in weeks, perhaps years.”
“That’s really not necessary,” I said. “I’m just going to drink my tea, wait for my bus, go back to Štiavnica, take a hot shower and then cry myself to sleep in the foetal position.”
“No, no, no. That won’t work. This is what you do: take a shot of borovička and then go swimming in a cave.”
“No, really, I don’t want any alcohol, I just want to go back... Uh, pardon me, but - did you just say I should go swimming in a cave?”
“After you take a shot of borovička, yes.” And they appeared sincere.
“Okay, so, just to clarify, you’re saying that I should down a shot of borovička and then have a dip in a cave. Is that right?”
“Exactly!”
“Yes, I see. So, Ján and Gabo... what exactly are you guys drinking anyway?”

Recovering in a steaming cave pool

Crazy as it all seemed, I figured I had nothing to lose by following their instructions; at this point it wasn’t as if things could have taken a turn for the worse.

The borovička, of course, warmed me instantly. And this cave they were speaking of turned out to be the Jaskynný Parný Kúpeľ, a thermal hot spring seeping out of a real cave which is now a steaming pool of healing water. The woman working the bath gave me a stern look when I approached (I was, after all, dripping wet and covered in mud). But she allowed me to enter - thanks to Ján and Gabo’s urging - after ordering me to strip in the front entryway. When she found out I did not have a swimsuit, she gave me one. And that is how I came to know what I look like in a Speedo, although that is something I really did not want to find out. 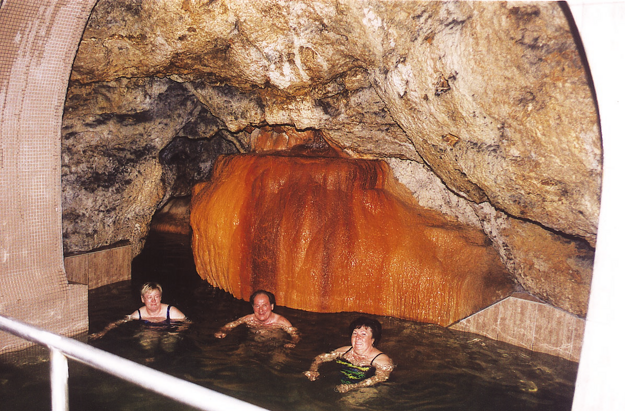 The cave was, I must admit, divine. I soaked in the water for 30 minutes, all the while feeling the day’s stress melt away. It was a strikingly better feeling than, say, shivering under trees in a forest, being chased by ferocious dogs on a farm, spitting out mud after nearly biting my tongue in half, or being victimised yet again by the shenanigans of central Slovakia’s trail markers.

After bathing, I was wrapped in a thick blanket and told to lie on a bed, where I promptly fell into a blissful sleep. Bathers are not actually supposed to sleep on these beds, mind you, but the woman who gave me that Speedo swimsuit will gladly wake snoozers by kicking the table and shouting: “Nespi! Spi doma!”. (Don’t sleep! Sleep at home!)

This is all, of course, a rather roundabout way of getting to my point, which is twofold. First, bags with holes in them are not, I repeat, not waterproof. Second, whenever meeting a pot-bellied pair of barflies named Ján and Gabo in Sklené Teplice, do whatever they tell you. No matter how daft their suggestions may seem, you will not be disappointed. 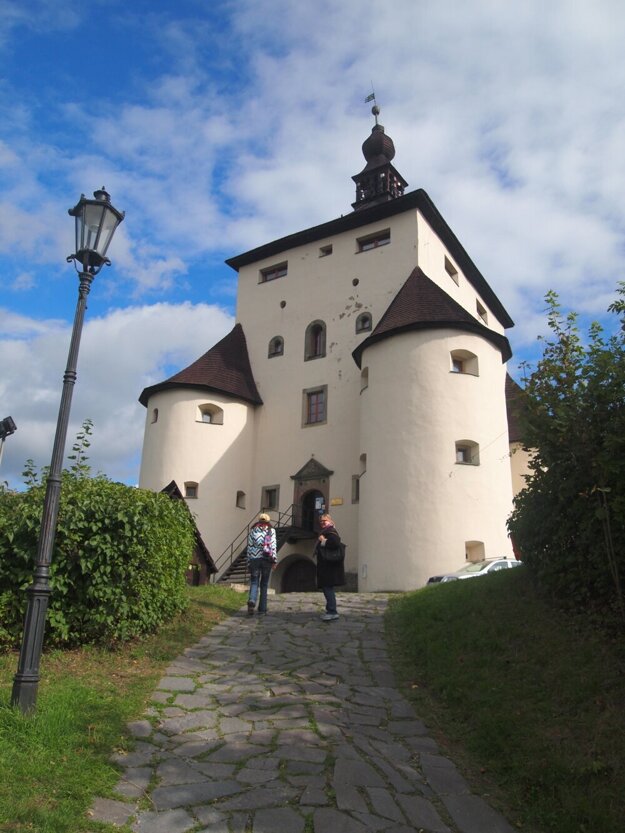