Poll: Muslims are seen as the least preferred neighbours

Slovaks have not fully embraced diversity yet. 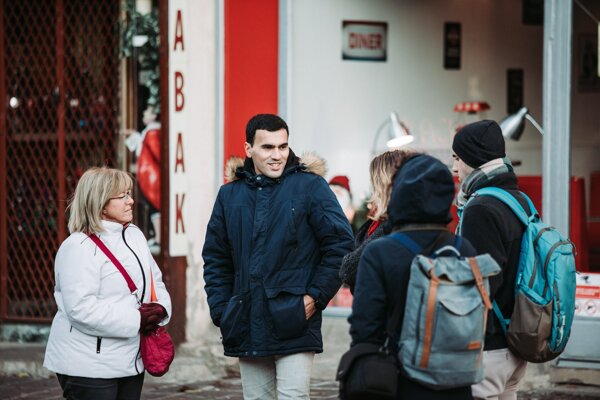 Afghan Rayeiz Rahman takes Košice locals to the places he likes in the city during one of the[fjúžn] walks on December 11, 2019. (Source: [fjúžn]/Facebook)
Font size:A-|A+  Comments disabled

Back in September 1993, when Slovakia was four months into the first anniversary of its establishment, Addy Akram found himself teaching English in the small north-eastern Slovak town of Spišská Nová Ves.

“It didn't take long for pretty much everyone to find out who I was and where I was from,” the British citizen of Indo-Pakistani ancestry said.

Once barriers break down and people are able to interact freely, prejudices tend to vanish.

Despite Slovaks having little experience with foreigners back then - particularly outside Bratislava - Akram noticed only slight hesitancy when meeting locals. Some confused him for a Roma. He has been based in Spišská Nová Ves for 27 years now, and he considers his experience with neighbours and other locals ‘very positive’, admitting that occasional misunderstandings have occurred.

“However, I would not put that down to my ethnicity but rather to a failure in communication,” he noted.

A recent poll carried out by the Focus poll agency for the Milan Šimečka Foundation has found nearly half of 1,009 respondents would want to talk to a foreign neighbour, but Slovaks would prefer Ukrainians – unlike Saudis and Afghans - as neighbours. However, only about 30 percent of those polled would consider spending more time with them.

In spite of his positive experience, Akram, now a popular local and regional councillor, has admitted to facing backlash after he became politically active in 2006.

“There is a certain amount of hate directed towards me and the common theme is that I, as a non-Slovak, shouldn't have the right to be publicly active,” he said.

This rather negative approach to foreigners, also reflected in the poll, thus confirms that Slovaks have not gotten used to diversity fully, in part because of the country’s past, public discourse, and the lack of experience of Slovaks living with foreigners in a community.

Even though more foreigners live in Slovakia, almost a third of 145,940 foreigners is estimated to live in the Bratislava Region.

“Therefore, a significant part of the population does not come into contact with foreigners, or meets them only rarely,” Nina Galanská, head of Milan Šimečka Foundation, said.

A change in the perception of foreigners, according to the head’s words, must thus not rely just on personal experience but, instead, come hand in hand with the transformation of the public discourse.

The poll - carried out on the occasion of the 15th anniversary of the [fjúžn] festival - has shown, in addition, that nearly 10 percent of Slovaks would consider moving away if a foreigner were their neighbour. Even though Slovaks are careful when in contact with new people, Galanská suggested, their mostly irrational fear and xenophobia are not robust enough to make them leave their place.

Afghan refugee and student Ahmad Faisal Kamali told The Slovak Spectator that he has not had a problem in the past seven years with locals nor his neighbours: “They’re my friends, and I like them”.

Yet, over the last decade or so, it has been observed that the attitudes of Slovaks towards different minorities has become more xenophobic. In 2017, the Institute for Public Affairs (IVO) claimed that social distancing had worsened since 2008 due to the migration crisis, media-covered terrorist attacks, and prejudices driven by the unhealthy narratives of politicians.

As much as 70 percent of the approached respondents in 2008 said they would not have been happy if a Muslim family were living their neighbourhood; the portion increased to 79 percent nine years later. A case in point: Somalian refugee Khadra Abdile and her son faced horrific attacks repeatedly in Bratislava after the migration crisis – still ongoing – starting in 2015.

In the 2008 and 2017 polls, an overwhelming majority of the respondents - more than 80 percent – would have rejected extremists in the neighbourhood as well.

Kamali went on to say that it is also normal to come across bad people, noting: “As a foreigner, I must adapt to life in Slovakia”.

The trend of foreigners coming to Slovakia for various reasons will hardly change under the settings of today’s world, which is why Slovaks must learn to understand and see migration more positively and in a global context, Galanská stressed.

“The lack of integration policies, their vagueness, and their national as well as local settings unfriendly to people speaking languages other than Slovak leads to exclusion and dissatisfaction.”

Looking at the police statistics from January 2020 until mid-summer, there were 63 extremist and racially driven cases reported, but only 17 of them were resolved.

As a foreigner, Akram comprehends people’s fear of the unknown – fuelled by misinformation spread on social media and the rhetoric of populist politicians – but he also believes that when people get to know a foreigner personally, they will realise they are the same, with the same goals and values.

“Once barriers break down and people are able to interact freely, prejudices tend to vanish,” he said.