The recently published verdict pertains to a notorious 2013 police raid in the eastern-Slovak town of Moldava nad Bodvou. 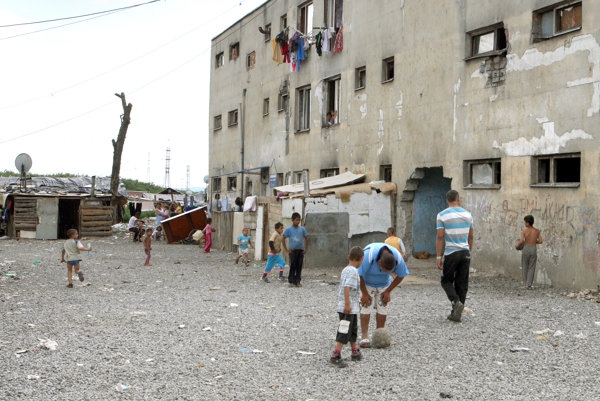 The Slovak Spectator will bring a more detailed report on this story early next week.

Two of the citizens who suffered injuries in a police raid in the eastern-Slovak town of Moldava nad Bodvou back in 2013 have faced inhuman treatment and their right to a just process has been violated.

This stems from a ruling that the European Court for Human Rights (ECHR) in Strasbourg published on September 1, 2020. The ruling pertains to the case of R.R. and R.D. versus Slovakia.

R.R. and R.D. are two of the group of about 30 people, which included women and children. In June 2013, more than 60 police officers raided the Roma settlement of Budulovská in Moldava nad Bodvou, eastern Slovakia. The raid was called Action 100. They pulled out batons and ruthlessly beat anyone who got in their way. They went on to kick in a door and shatter windows. Several Roma had bumps and bruises on their faces and ribs. This is how they described the raid in their testimonies. But there is no video footage to prove their version.

The ECHR now ruled that R.R. and R.D., represented by the non-governmental Centre for Civil and Human Rights, based on a motion filed in 2018, found violation of Articles 3 and 14 of the European Convention of Human Rights. It upheld the view of the plaintiffs that they suffered inhuman treatment and that the authorities failed to conduct a proper investigation into that ill treatment.

Read more about the Moldava case

This is the first of two expected rulings of the ECHR linked to the Moldava nad Bodvou raid, which has in the intervening years become notorious in Slovakia.

The European Centre for Roma Rights has filed a complaint on behalf of the rest of the group of those affected by the police raid. They are represented by lawyer Roman Kvasnica. He told the Sme daily that he expects the ECRH to deliver a similar ruling in the case he is representing too.

"The fact that police corps members violate the law is not a failure of the rule of law. The rule of law failure only occurs when [the violation] is not investigated," Kvasnica said as quoted by the Sme daily.

All the police officers suspected of committing police violence have been stripped of suspicions, while five of the Roma citizens face indictment for perjury.

The court awarded €20,000 to each of the applicants as non-pecuniary damage, and €6,500 jointly in respect of costs and expenses.

"The court is issuing the ruling symbolically on the day when we mark the passing of our Constitution," said a lawyer from the Centre for Civil and Human Rights, Vanda Durbáková. "It is thus a message to state institutions that they must always proceed and rule in line with the Constitution and secure the keeping of rights and freedoms anchored in it."