Politicians, non-governmental sector and journalists ask for the fight for justice to continue. 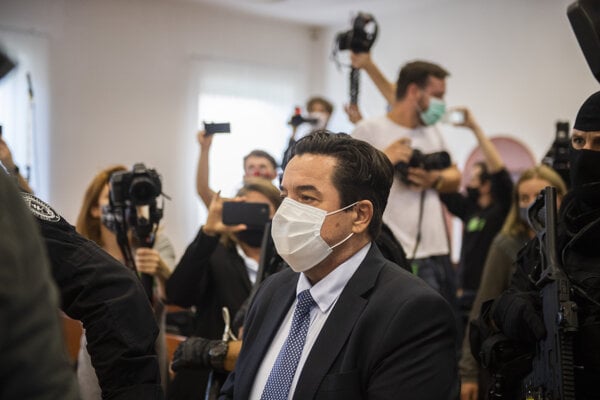 Marian Kočner escorted to the courtroom on September 3 to hear the verdict. (Source: TASR)
Font size:A-|A+129

“I was shocked by the verdict and need to understand its explanation,” President Zuzana Čaputová wrote on Facebook. “I respect it, but I expect that the search for justice will not end and will continue at the Supreme Court.”

She is also thinking about the parents of the murdered couple and wished them strength.

“They and also all of us deserve to see that the consequences against those who ordered and arranged the murder of their children are drawn,” she added.

“It seems that for now the apparent instigators of the murder would like to slip out of clutches of justice… Let’s believe that justice will wait for them both,” PM Igor Matovič (OĽaNO) commented.

“Regarding the current state of our judiciary, we’re left with nothing else than hope that the judges decided based on evidence and facts, and not something else,” Speaker of Parliament Boris Kollár (Sme Rodina) commented.

Junior coalition party Freedom and Solidarity (SaS) stressed in its comment that the trial is not over yet.

“We know the executors of the murder, but we don’t know the origin of this crime,” the party wrote on Facebook, adding the indirect evidence pointed to Kočner and Zsuzsová. “It is thus striking what kind of verdict we heard today.”

Although the ruling deems that the people who ordered and arranged the murder are unknown for now, they believe in the justice and that these people will eventually be sentenced for the murder.

Interior Minister Roman Mikulec (OĽaNO) also admitted he was caught off guard by the verdict. In his reaction published on Facebook, he reminded of the corruption and mafia practices at the top police and political levels, revealed by the investigation, and how these people helped criminals plunder the state and pursue opponents.

“As we learn all of this today, I was really surprised by the verdict that acquitted Marian Kočner,” Mikulec continued, stressing that the law should be the same for everybody and one cannot be sentenced only because crowds from the streets or journalists are asking for it.

He also said that it is not his right to evaluate the work of investigators, prosecutors and judges, and stressed he respects the verdict.

“But as the interior minister, I express my full devotion to do everything to ensure that the police have free hands for an honest job that prosecutors and judges will be able to rely on.

“I am very disappointed and sad,” commented Peter Bárdy, editor-in-chief of the Aktuality.sk news website, where Ján Kuciak worked. “The court did not find Kočner and Zsuzsová guilty of the murders of Ján and Martina due to a lack of evidence. Although I'm disappointed, we are not resigning! This is not the end. Not even close. I am convinced that Kočner had Jan Kuciak murdered!”

Although September 3 was the day everybody was supposed to have a rest, Kočner and Zsuzsová were found not guilty, while Szabó was sentenced to 25 years in prison, the For a Decent Slovakia movement, which organised mass protests across the country after the couple had been murdered, wrote.

They stressed the need to find the person who ordered the murder and sentence him/her.

“We want to believe that the judges checked all the evidence properly and the verdict announced today follows their best consciousness and conscience,” the initiative wrote on Facebook, stressing it is only the first-instance decision, and since two senate members outvoted the senate chair, the Supreme Court will have the final say.

“More than 2.5 years after the killing of Ján Kuciak and Martina Kušnírová, the court decision of today shows that there is still work to do to ensure justice and prevent impunity,” Council of Europe’s Commissioner for Human Rights Dunja Mijatović wrote on Twitter. “This is owed to the families and colleagues of both victims, as well as to Slovak society at large.”

“RSF is shocked by the verdict in the case of Jan Kuciak’s murder as the people accused of being mastermind & intermediary are acquitted,” Christophe Deloire, secretary general of the Reporters Without Borders (RSF), wrote on Twitter. “An acquittal is an evidence of a huge failure of the investigation bodies and the judiciary.”

The acquittal of suspected mastermind Marian Kočner in the murder of Slovak journalist Ján Kuciak and his fiancee Martina Kušnírová is a major setback for justice and the fight against impunity, the International Press Institute (IPI) commented.

“Slovakia has to start it all over again, until the murderers are convicted”, said IPI Executive Board Vice Chair Beata Balogová, editor-in-chief of the Sme daily and a key voice in the fight against impunity for Kuciak’s and Kušnírová’s murders. “Only then our faith in justice in Slovakia will be restored. Until then, we will be a country where murderers of a journalist escape punishment. I also think of the families of the victims and how their wounds are being opened up again and again.”

“We are hugely disappointed by this verdict, which repeats a tragic pattern we see worldwide: the hitmen go to jail while those ultimately responsible for the murder of journalists remain free,” IPI Deputy Director Scott Griffen, who attended the hearing, said. “But this cannot be the end. The fight for justice must continue. Investigators and prosecutors must restart their work, must push forward and ensure that this case does not become yet another cold statistic in the battle against impunity.”

The verdict will be a great test for society’s trust in justice, ethics watchdog Transparency International Slovakia (TIS) said.

“Today’s verdict acquitting Marian Kočner and Alena Zsuzsová is certainly shocking for most people,” it wrote on Facebook. “Justice either fatally failed, when we were reading and hearing about a chain of evidence against the defendants for months, or notably moved up a gear, when it did not succumb to the strong atmosphere in society, calling for strict punishments for them.”

Although only the Supreme Court will give us a definite answer to understand the situation better, it is already clear that the ruling confirms the objections to dissolving the Kuciak investigation team by former police corps president Milan Lučanský, and it does not help improve the trust in police and the prosecutor’s office.

“It now has to be the top priority for the Supreme Court and law enforcement bodies to prevent this case becoming the last nail in the coffin of the trust of the public in the judiciary and justice in Slovakia,” TIS stressed.