Kotleba guilty is one small step for Slovakia to get rid of fascism, says historian

The verdict might become a precedent, extremism expert believes. 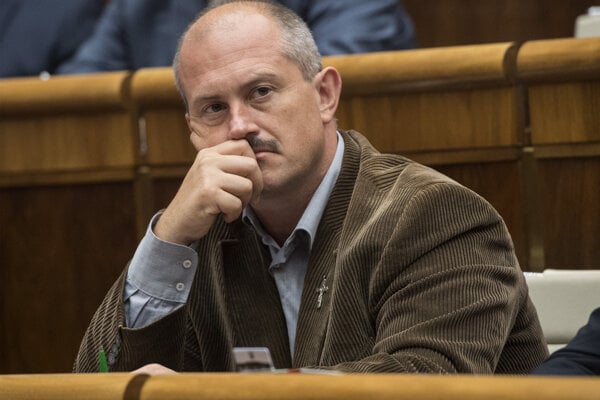 - why the court found Kotleba guilty

- what the impact on the far right party might be

- how the verdict could influence extremists in Slovakia

March 14, 2017. The then Banská Bystrica regional governor and leader of the far right party Marian Kotleba celebrated the anniversary of the wartime Nazi-allied Slovak state with another 400 people. A donation to three families in need was part of the event.

Kotleba donated three "cheques", in fact three large one-metre long boards, to three families. Each clearly displayed the donated sum, €1,488. Although he later claimed in court that the sum was coincidental, the number is also a prominent neo-Nazi symbol.

14 stands for 14 words in the sentence attributed to American white supremacist David Lane about securing the future of white children, while 88 stands for the Nazi salute Heil Hitler, as ‘H’ is the eighth letter in the alphabet.

How IT teacher brought extremists to parliament Read more

Kotleba denied any symbolism in the donations, but failed to convince the court with his claims. On October 12, 2020, the Specialised Criminal Court sentenced him to four years and four months in a minimum security prison. The leader of the parliamentary People's Party - Our Slovakia (ĽSNS) and a member of the Slovak parliament was found guilty of supporting and propagating sympathy towards movements oppressing fundamental human rights.

“It is the first significant verdict to the disadvantage of extremism in a long time. It may become a precedent in similar verdicts in future,” Tomáš Nociar, an expert on far-right movements, told The Slovak Spectator.