One of Bratislava's oldest parks will regain its historical look

Decades of missing maintenance have left a mark on Rusovce park. 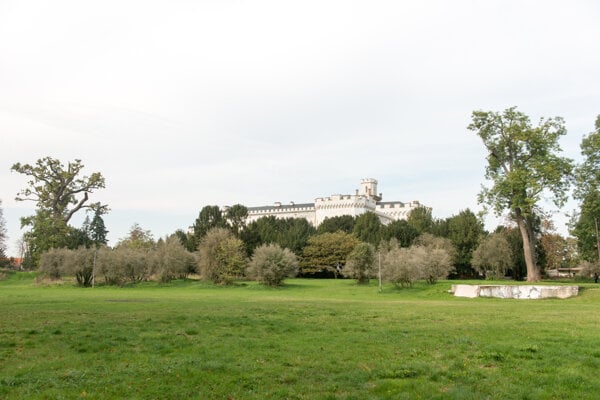 The manor house in Russovce with remains of terraces adjacent to its southern wing. (Source: Jana Liptáková)
Font size:A-|A+6

The park surrounding the Rusovce manor house is one of the best-preserved monuments to the art of gardening in Slovakia. Yet, until recently, it did not look like that at all.

The park around the manor house in Rusovce has a long history, during which not only its size changed, but also its architectural design, methods of use and its vegetation. At present, only the 16.8 ha space around the manor house up to the Rusovský canal, an arm of the Danube, is understood as the park. In the past, however, the park also included the part behind the canal. Today, this part is a protected area.

The park attained its current form by rebuilding the originally baroque garden into a natural landscape park. The last major changes in the park date back to when the manor house was owned by Count Elemír Lónay and his wife, Princess Stéphanie of Belgium. They bought it in 1906 and owned it until 1945. The Lónay family had built the neo-gothic water tower, a multi-level garden, incorrectly called a Japanese garden, with wooden pergolas on stone pillars, as well as terraces connected by stairs and lined with box plants at the south wing of the manor. After WWII the manor house and the adjacent park became state property. The maintenance of the park was not systematic and its condition worsened. The situation was also complicated by a long-lasting dispute over the ownership of the manor house between Slovakia and the Hungarian Congregation of the Order of St Benedict. Slovakia won it in 2012. Today the manor house with the park is administered by the Cabinet’s Office.

The park, located in Rusovce, now a municipal part of Bratislava, has not received any systematic maintenance since 1945, and it looks that way. Today, it seems that better times for the park are about to come.

Arborists have worked for almost a year to bring the park back to how it used to look under its last private owners, the Lónay family. They owned the manor house, including the park, from 1906 to 1945.

“The goal is to return this area a natural-landscape character,” said Tamara Reháčková, landscape architect and author of the park restoration project. Together with Tomáš Harmady from A.I.I. Technické Služby company, which performed arboricultural work in the park over the last year, she gave a guided tour around the park in mid-October during the Weekend of Open Parks and Gardens.

The plan the restoration follows is to keep the basic concept: alternating shaded areas with trees with loose grass, adding beds of perennials and many decorative bulb flowers in the shaded areas to bring colour to the park. Terraces and the water tower will be renewed and the park will gain new benches and lighting.

The idea was to make as few drastic interventions, like felling trees, as possible during the arboricultural works. But due to neglected care, 480 trees no longer met the safety criteria and posed a risk to visitors and thus were cut down.

Another thousand trees, or almost 80 percent of all trees in the park, were pruned by arborists in accordance with the close-to-nature care trend.