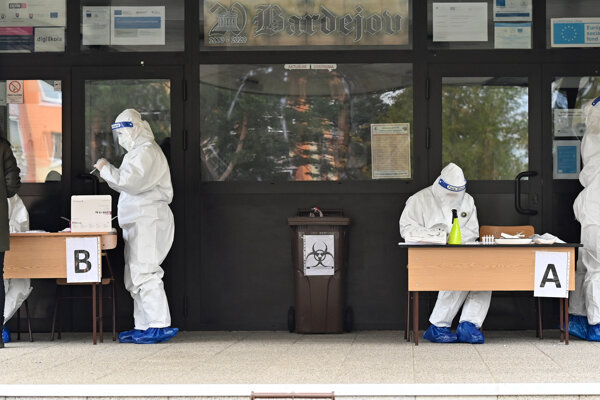 Two children were waving from the classroom window to the people in the schoolyard.

Down below, the dozens-of-metres-long queue of people paid no attention to the greeting; they only heard the echo of half-whispered obscenities uttered by one of the Orava locals who came to get tested early on. He made sure to complain loud enough to be heard by his fellow queuers.

"Why is the army here? Do they not have better things to do?" was the most decent language that he used.

About 40 people were waiting for their COVID test in front of one of the testing sites in Dolný Kubín, a local school, from early morning.

Others in the queue were nervous too, standing in the cold weather, when even 20 minutes after the official start, 8:00, the testing had not started yet. But they were better at staying calm about it. Everyone made sure to maintain a 2-metre distance from others.

A few hours later, PM Igor Matovič (OĽaNO) wrote on Facebook that people turned up to the mass testing in Orava and in Bardejov district "without complaints but with responsibility and hope".

In reality, most had turned up to queue in front of the testing sites before they opened, due to the strict curfew that applies in the regions as of Saturday. Without a negative test, they will not be able to go to work.

"I don't know if they will even need me at work, seeing that I am a waiter, but I will be glad to put this behind me," said a local from Dolný Kubín, Michal Fisher.