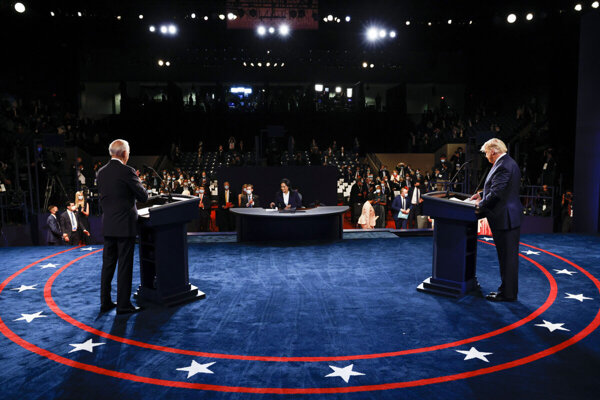 For all the pretence at deliberation, the world’s greatest democracy has been reduced to holding not a battle of ideas but a referendum on the truth.

Were the stakes not so high – for us as well as for them – we might enjoy the spectacle of this extraordinarily dramatic presidential election:

One candidate has an embarrassment of policies; the other has virtually none.

One honours scientific advice; the other mocks it.

One speaks in careful prose that occasionally betrays his stutter; the other, a born showman, barks ungrammatical non-sequiturs that tap straight into his listeners’ prejudices and resentments.

One is a flawed but decent man with a long record of public service – what we used to call “a normal politician”; the other is a grotesque narcissist, a compulsive liar who thrives on division and gleefully stokes hatred.

In other words, this a not a political choice, but a moral one.

In 2016, enough US voters could convince themselves that Trump somehow deserved a chance. But the truth was clear enough even then.

As David Remnick, editor of the New Yorker magazine, lamented on election night in 2016: “That the electorate has, in its plurality, decided to live in Trump’s world of vanity, hate, arrogance, untruth, and recklessness, his disdain for democratic norms, is a fact that will lead, inevitably, to all manner of national decline and suffering.”

That suffering has duly arrived – with a vengeance. But the consequences of America’s choice are being felt by countless people who have no voice in this election.

For when Trump speaks and acts, in the name of a country that guarantees the security of half the world and, through the dollar, backstops much of its economy, he validates not just the racists, charlatans and misogynists in his own country, but in ours too.

Show me a leader who despite his racist tendencies must still use dog-whistles – “very fine people on both sides”, “stand back and stand by” – to appeal to his white supremacist supporters, and I will show you a Slovak political leader and MP who has a long history of making openly racist statements and dressing up in fascist uniforms, and who was this month sentenced to more than four years in prison for promoting neo-Nazism.

Show me a commander-in-chief who excuses Vladimir Putin’s policy of state-sponsored assassination, and I will show you a Slovak former prime minister who suggests that Alexander Lukashenko’s brutal crackdown on opposition protesters is perfectly normal, and rebukes his own country’s diplomats for “interfering in Belarus’s internal affairs”, stating “it’s necessary to let Belarusians decide what they desire” – as if they have a choice.

These individuals were not created by Trump, but they are all emboldened by his behaviour and by the evidence that nearly half the citizens of the richest democracy on earth can be gulled, by self-interest, resentment, stupidity or worse, into backing him.

His vision of society – as a carnival of self-interest – is precisely the one that they would like to see here.

A message to the world

Given the gravitational pull of American culture and politics, Slovak voters could be forgiven for believing, if Trump is re-elected, that democracy really is just the plaything of demagogues.

We cannot reasonably expect Americans to take Slovakia’s – or anyone else’s – plight into account when they vote. But like it or not, they are about to send a message to the world. For their sake and for ours it had better be the right one.