The One World festival to livestream discussions in English as well. 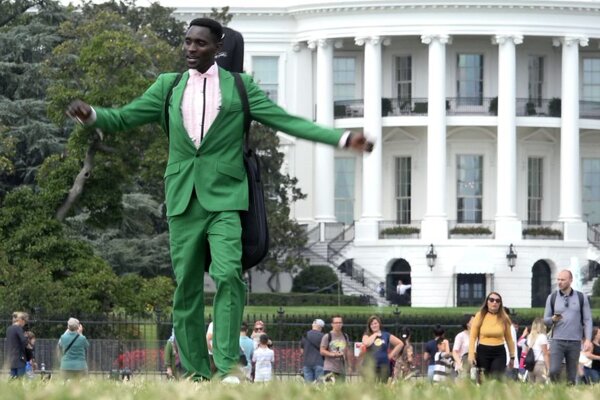 The One Way Ticket documentary, following a path of two refugees from Africa to the USA, will be screened during the One World festival on November 11. (Source: Gregoire Gosset)
Font size:A-|A+187

Music means the world to Marzia, even if she lacks encouragement from her family.

One World in a nutshell:

“A good Muslim does not make music,” her father told her many times.

Still, the Afghan teenage girl decided to move from a home village over to Kabul and join the notable all-female orchestra Zohra, growing into a talented violinist.

In Afghanistan, where music used to be banned under the Taliban regime and women had their rights restricted, it is music that now gives hope for a brighter future to the girls in the orchestra.

In 2019, Zohra managed to play several concerts in Slovakia. The new Slovak documentary, Orchestra from the Land of Silence, follows its way from the Afghanistan National Institute of Music to central Europe.

The picture will premiere at the international documentary film festival One World in early November, which will be held online due to the pandemic.

In search of a better life

The main theme of this year’s festival, which will screen nearly 50 films on migration, climate, relationships, new technologies, political regimes and human rights, is choice. Several discussions in English are planned as well.

“There will be a lot to talk about, maybe even more than ever before,” said Eva Križková, head of the festival.

Where to watch One World films and discussions:

A case in point: Lucia Kašová, director of Orchestra from the Land of Silence, will speak with Zohra members and Mozdah Jamalzadah, an Afghan singer and presenter living in Canada, about their choices in life.

The One World festival will simultaneously bring stories of other women from different parts of the world.

The documentary Overseas, which deals with the question of modern slavery, looks at the journey Filipino mothers have to set out on to earn a living, starting in a Philippine government-funded training centre and ending up as housekeepers in Dubai.

On the other hand, Lovemobil draws attention to women from Africa and eastern Europe working as prostitutes in rural Germany.

Migration, which people are forced to do for plenty of reasons, will indeed be a heavily present topic throughout the festival.

For instance, the One Way Ticket film tells the story of Jean-Pierre Ntegyeye and Isaiah Bahati, who had to flee from the Democratic Republic of Congo in 1996 and spend years in the Ugandan refugee camp before resettling in America.

“We hope that when someone sees this movie that people will understand that refugees are suffering, but they are strong people: they want to work, and they can contribute to the economy of a host country,” Ntegyeye told UN News.

On November 11, in an online debate, Polish journalist Anna Alboth will speak with Yolande Ditewig, UNHCR Senior Regional Policy Officer, and Zuzana Vatráľová, Head of Office at the International Organisation for Migration in Slovakia, about life in a refugee camp and resettlement as an important tool for international cooperation.

In addition, the festival will screen One More Jump, a film that captures the story of two friends from the Gaza Strip, Jehad and Abdallah, who founded the Gaza Parkour Team. Their choices - one leaves for Europe to become a professional athlete while the other stays to give hope to young boys through parkour – parting ways for many years.

Reunited is another documentary to highlight the issue of migration, and what it feels like to be part of a family divided by the war in Syria.

On Trump, Wuhan, and climate change

“We selected the documentaries with regard to the importance and topicality of stories, but we also took their attractiveness into account,” festival’s creative director Diana Fabiánová said.

Therefore, the festival will take viewers to Wuhan thanks to the Coronation documentary, where the pandemic started, and will offer several films on climate change, including 2040 and the Great Green Wall.

As with climate change, the One World festival has already launched the volba2050.world exhibition online, which will be available to visitors of the Nová Cvernovka hub in Bratislava as soon as anti-coronavirus measures are eased.

In the meantime, they can enjoy a debate with British writer and climate change activist Graeme Maxton on November 9.

One World will be surfing the post-US election wave as well. A few days after the vote, on the evening of November 7, Bulgarian political analyst Ivan Krastev will examine the outcome of the US election and its impact on the future of Europe.

On the other hand, the Dan Partland documentary, Unfit: The Psychology of Donald Trump, will answer the question of how big a narcissist Donald Trump actually is.

The One World festival has been organised in Slovakia for more than 20 years by the Človek v Ohrození (People in Need) organisation.