Dancing in protective suits, a soldier as DJ. These videos show the funny side of testing

Funny invitation to testing or the world of the Matrix. These videos and pictures from the testing were popular on social networks. 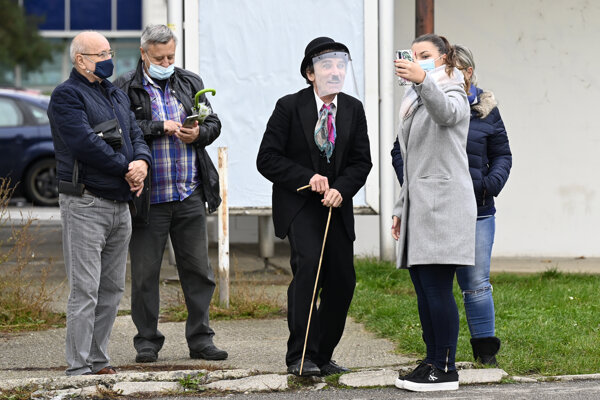 The nationwide testing dominated the news during the previous weekend.

Besides the videos and information about long queues and updates to the sampling sites, many people have uploaded videos with testing teams having some fun during breaks, mostly dancing to a mix created from a video of PM Igor Matovič (OĽaNO) during a visit to Brussels.

Some were posting memes, referring to a popular hoax that by taking a swab, hygienists will insert a chip into your head.

The Slovak Spectator picked some popular videos and memes that were uploaded the past weekend.

Following the pilot testing in the Orava region when two sisters from the village of Horná Lehota documented their day as volunteers and posted several stories on their Instagram accounts, similar videos were uploaded on social networks, showing the testing teams having some fun during breaks.

A very popular video was created by a team from the village of Pribiš in Orava, inspired by one of the videos created by the two sisters:

Other teams got inspired:

A team from Slovenské Pravno, in the Turčianske Teplice district, posted an original dancing video:

A team from Žilina created dance choreography in front of the cultural site Nová Synagóga (New Synagogue) after the testing site closed. They had an original DJ:

There were some videos of how people passed their time waiting in the lines:

On Sunday, November 1, when the queues were considerably smaller than the previous day, a testing team from Vajnory in Bratislava published a very original invitation. It was inspired by a long-running programme broadcast by the public-service RTVS, showing conditions in popular ski centres:

The pictures from testing also created a good base for some memes. For example, this is how the Christmas markets of 2020 may look:

Others have ridiculed a hoax spread on the internet that while taking a swab, a chip may be inserted in one’s head. This is how President Zuzana Čaputová and PM Matovič may look after the testing:

Interested in how the idea originated? This picture may give a clue:

And this is how smart we will become after the testing:

Some pictures even suggested how differently we will see the world around us after the testing. Some suggest a Terminator-style vision:

The others a Matrix-style vision:

The fact that Slovakia is often mistaken with Slovenia is a long-running joke. A comment under a story about the testing run by the British daily The Guardian shows that some people even place it on a different continent: