Reactions to the result of the US presidential election. 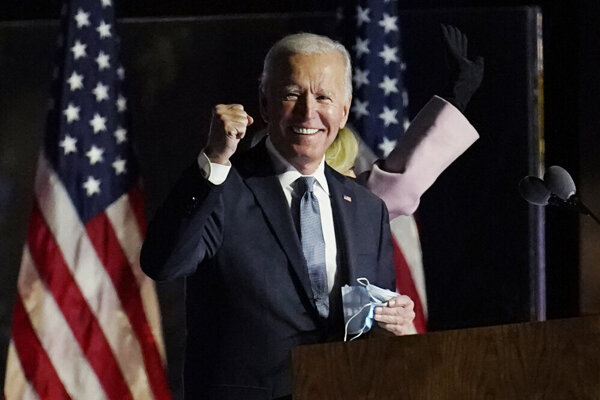 Joe Biden is to become the 46th president of the United States. (Source: AP/SITA)
Font size:A-|A+125

Slovakia is ready to work closely with the US administration, Foreign Minister Ivan Korčok tweeted after the world learned that Joe Biden has been elected the 46th president of the United States.

Korčok, who previously served as the Slovak ambassador to the US, expressed determination to strengthen the transatlantic relations under Biden as president.

PM Igor Matovič also extended his congratulations to Biden on Twitter, saying he hopes cooperation between the US and Slovakia will continue.

Matovič said that he expects the EU and the US to work as "global and engaged allies".

"I wish you and the American people strength to face challenges ahead of us," she wrote on Twitter. "We share the same values of freedom, democracy and cooperation, which make our Transatlantic partnership unique and our unity strong."

Head of the European Affairs Committee of the Slovak parliament, MP Tomáš Valášek, who is also former Slovak ambassador to NATO, wrote that Biden and Kamala Harris were "definitely a better choice for Slovakia and for Europe".

"After years of running on reverse gear, transatlantic partnership has just shifted to first gear," Valášek wrote on Twitter.

Investment Minister Veronika Remišová stated that now more than ever, leaders who can unite people and form alliances are needed. She believes that under the new leadership, the US will be a reliable ally to Europe and to Slovakia.

State secretary of the Foreign Affairs Ministry Martin Klus (SaS) hopes that the fact that current US President Donald Trump is casting doubt on the election results will not impact the rule of law in the US and its democratic institutions.

“The risk arising from the lack of respect of the results is big because this scenario could be copied in other countries of the world,” Klus said, as quoted by the TASR newswire. “This will have a significant impact on the trust in democracy as such.”

His colleagues from the SaS party hope that Biden’s election will improve the relations between the US and the EU, as well as the international institutions, as reported by TASR.