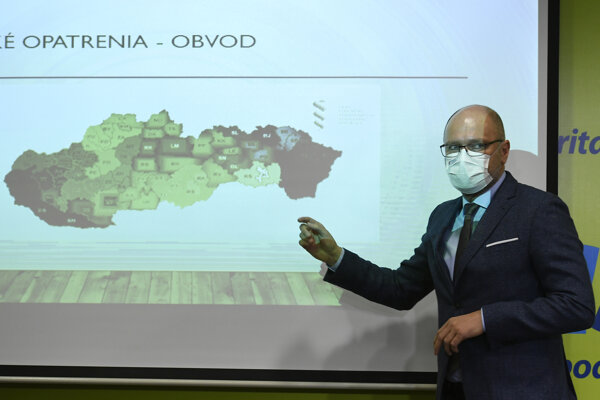 The junior coalition party Freedom and Solidarity (SaS) introduced its own plan to contain the coronavirus, based on the traffic light system.

“The current fight against the pandemic is chaotic and the opinions of experts are ignored,” SaS chair and Economy Minister Richard Sulík told the November 23 press conference.

The party prepared the plan in collaboration with experts. It proposes dividing the regions in Slovakia into riskier and less risky areas and adopting the measures accordingly. This means that less stringent restrictions would be put in place in less risky regions.

The plan will be presented during the central crisis staff meeting on November 23 at 14:00.

“We don’t see a reason for having the same strict measures in Vranov nad Topľou (where the situation is very bad) and let’s say Veľký Krtíš with better numbers,” Sulík said. “The plan needs to be more sophisticated; otherwise, we’ll let the economy choke.”

The plan is divided into eight chapters:

This contains across-the-board measures that should be observed by everybody. The SaS recommends wearing masks in interiors as this proved effective back in the spring. It also wants to protect people aged 65+ by sending them 15 masks a month by mail. Other measures that should be applied include 2-metre social distancing, hand disinfection, the proper ventilation of rooms and decreased mobility (also by temporarily halting the measure that enables seniors to travel by trains for free).

SaS proposes the division of Slovakia into 36 precincts, based on the headquarters of the regional Public Health Authority office (RÚVZ). They should be classified based on a “score” calculated from:

These precincts will then be placed in four zones based on their scores. Different measures will be applied in different zones:

The party was inspired by the Czech Republic, which uses the same model. The criteria may change during the debate with experts, Sulík admitted.

The party opines a more detailed plan should be made for testing, including who should be tested where and with which type of tests. It also suggests watching the hotspots more closely to prevent outbreaks.

Slovakia should be more active in the European initiative to trace contacts and create an electronic registration of tests, including the antigen ones. It should keep the division of countries into red and green, and update the measures for those coming from non-EU states based on the common EU recommendations. The current exceptions should be kept. The party also proposes testing those entering Slovakia from other countries at selected border crossings.

The party wants to more actively use electronic data based on the current legislation. The state should use the app to improve contact tracing.

The current communication is chaotic, and the measures introduced one day are changed the next day, Sulík said. It is necessary to communicate the restrictions more clearly in order to restore trust.

Although there are already some established rules for compensating entrepreneurs that have to close down, SaS proposes a separate law dealing with this issue.

The party suggests harmonising the work of various committees and bodies dealing with the pandemic.

SaS also wants to prepare a warning system for schools.

It plans to create mobile testing units that can easily be transported to schools if there is any suspicion of infection. They want to test teachers, all employees and pupils, if necessary.

“It would enable pupils to return back to schools earlier and secure continual education,” Education Minister Branislav Gröhling said.

The ministry is ready to finance the testing.

Matovič has criticised the document, calling it the road to hell and a populist path. He has opposed the regional differentiation, labelling it irresponsible.

“We have to look at Slovakia has a united country,” Matovič said, as quoted by the TASR newswire.

Meanwhile, Health Minister Marek Krajčí (OĽaNO) has also come up with a new pandemic plan, but this has not been presented to the public. The Denník N daily obtained the document, describing which businesses should be opened or closed, and how to set restrictions. It proposes the creation of six zones.

Investments Minister Veronika Remišová (Za Ľudí) commented that politicians should focus on defining the principles the country will follow, and not compete with one another to present a better pandemic plan.

President Zuzana Čaputová commented on the current situation as well, saying that she appreciates everybody who is responsibly approaching the solution to the coronavirus crisis. She appreciated both ministers, and the scientists who have helped.

“It’s better to have two plans than none, and it’s even better to have one joint plan,” she wrote on Facebook, adding that this should now be their goal.