The new, more infectious variant of the coronavirus that was first found in the UK, was detected in Bratislava.

Health Minister Marek Krajčí broke the news on his Facebook page. He confirmed that the samples from Michalovce, Nitra, and also some from the capital resulted as positive for the B.1.1.7 strain. The ministry will do its utmost to map the presence of the virus in each of the regions of Slovakia, he added.

"I presume that the virus has been distributed all over our homeland and the isolation of individual regions will probably not be the answer anymore," the minister wrote, and suggested the measure may be limiting interregional mobility.

Strict measures preventing people from socialising are going to be in place for a long time, Krajčí wrote, without providing any further details. He noted the measures will need to be coupled with frequent testing of the population.

He thanked the teams of Slovak scientists for their fast work on developing the new PCR test to detect the new strain. 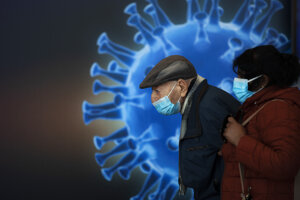 "Based on the information available to me, it is the very first screening test of this kind in the world, using the positive RT-PCR signal," Krajčí wrote.

The test was developed by the Slovak company MultiplexDX. Its head Pavol Čekan said on Friday that the sensitivity of the first version of their test nears 90 percent. It is currently undergoing the process of validation by the Biomedicine Institute of the Slovak Academy of Sciences. Boris Klempa from the lab said that they started examining positive samples in November but have only recently found the new strain.

Minister Marek Krajčí told the January 8 press briefing that the situation is escalating over the whole of Slovakia, with the numbers of those infected, hospitalised and who are victims on the rise.About a hundred people now die in Slovakia due to the coronavirus every day.

Hard times are ahead for the Slovak hospitals, Krajčí wrote on January 9. More beds will need to be reprofilised, and some hospitals will be turned into red hospitals (COVID-19 treatment facilities).The worst situation is currently reported in Nitra.