Deputy PM came from the UK and did not quarantine. What is the story behind his exemption?

Anyone can ask for an exemption at a ministry, the Public Health Authority says. Now they want to limit that option. 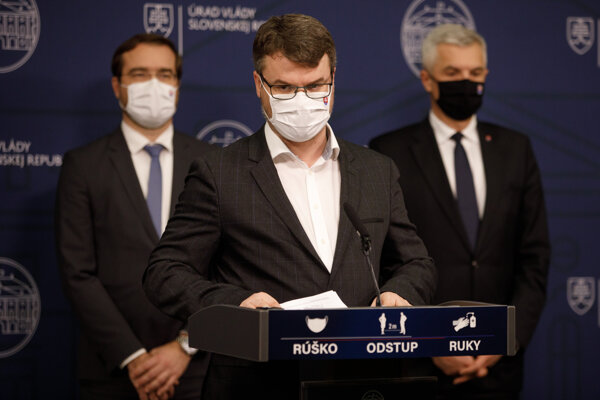 Journalists have been asking Deputy PM Štefan Holý (Sme Rodina nominee) and his coalition partners for three weeks whether he observed the rules and took a PCR test after his trips to the United Kingdom.

His case became exposed in the media because after he returned from the UK on December 13 and subsequently took part in the cabinet sessions on December 14 and 16, coronavirus infection was confirmed in several ministers, including PM Igor Matovič. Holý tested positive as well.

Holý apparently did not remain in self-isolation, as required by the rules. Based on the valid measures, he may have taken the PCR test and been able to move freely if the result was negative. Holý, however, did not show his test result and did not say whether he had one.

The Public Health Authority now claims that Chief Hygienist Ján Mikas granted an exemption for Holý, which allowed him to travel to the UK and return without quarantine or testing obligation. The authority confirmed this for the Markíza network on January 8.

Holý said he requested the exemption for family reasons, "due to the care of underage children who permanently live in the Great Britain".

"If the government takes the position that they want to be transparent and remove the tradition of 'our people', this is explicit evidence that they were not serious about their promises and that they are only transparent when it suits them," said Jozef Lenč, political analyst from Ss Cyril and Methodius University in Trnava.

The Public Health Authority under Mikas, who was granting the exemptions so far, now says that they would welcome if the option was cancelled. They will broach the topic at the next session of the Central Crisis Staff.

"If [exemptions] are limited or scrapped, we will welcome it," said the ÚVZ spokesperson Dáša Račková. "We understand citizens can sensitively perceive any kind of exemptions."

The Sme daily put together answers to the questions regarding the exemption for Holý.

What is the whole case about?