Political opposition in Russia should not end in custody

Slovak politicians respond to the detention of Alexei Navalny. 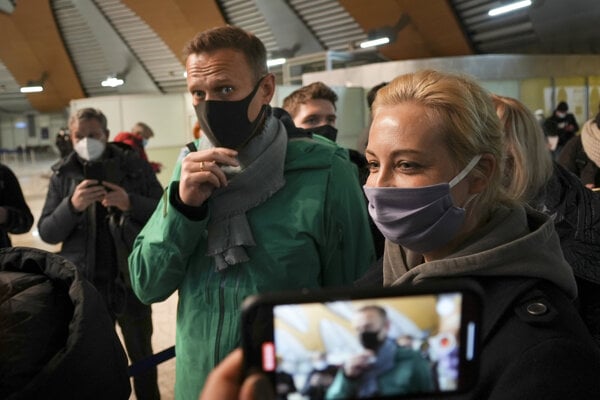 Alexei Navalny and his wife Yuliastand in line at the passport control after arriving at Sheremetyevo airport, outside Moscow, on Sunday, January 17, 2021. (Source: AP/SITA)
Font size:A-|A+3

Several of Slovakia’s representatives commented on the detention of Russian opposition politician Alexei Navalny after his return to Moscow.

“Mr Navalny’s detention will not break those in Russia who believe in freedom,” President Zuzana Čaputová wrote on Twitter. “Political opponents should be debated in a fair and open discussion, not jailed for their opinions.”

“Alexei Navalny’s place is in free and safe political competition and not in custody,” he added on Twitter.

Navalny was detained on January 17, shortly after his return from Germany, where he was recovering from an attack with a nerve agent, reportedly for violating several rules of his conditional release from prison.

He is to stay in custody until the court issues its decision, the TASR newswire reported.