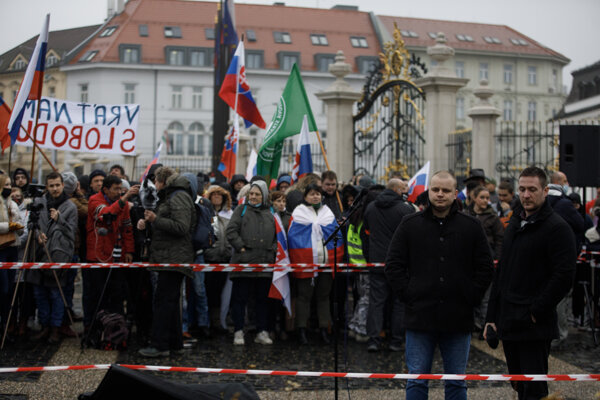 Milan Mazurek and Milan Uhrík in the foreground are significant faces of ĽSNS leaving the party (Source: SITA)
Font size:A-|A+1

Six politicians of the far-right People’s Party Our Slovakia (ĽSNS) are leaving the party. This decision came on the heels of their criticism of Marian Kotleba after he attempted to cement his position as chairman.

“All of them share my view of the events of recent weeks and they do not want to be part of a so-called new system of party operation anymore,” Uhrík said in a video he published on Facebook.

They complain that changes in the party statute transferred the competences of the party board onto the chair of the party. Kotleba is the only chair the party has ever had. The board no longer has decision-making competences, Uhrík argued when he announced his departure.

It is the first public conflict within ĽSNS, the extremist party that made it to parliament in 2016, whose representatives were re-elected in the 2020 election on nearly 8 percent of the vote. Since then, ĽSNS has controlled 17 chairs in the parliament. The party lost 3 members of its caucus when ultraconservative MP Štefan Kuffa and two more MPs broke away, who were not members of the ĽSNS, however. Now the party will lose five more deputies, most of them its prominent politicians. 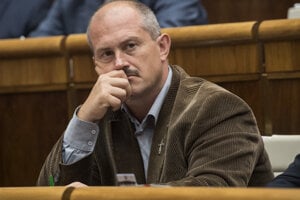 The split in the far right party, which polled at 10 percent in the January poll, happened only months after its chair Marian Kotleba was sentenced to four years and four months in prison on extremism charges on October 12, 2020. The verdict has yet to be confirmed by the appellate Supreme Court. The date has not been set, but it is expected in the coming months.

“The threat of Kotleba's conviction and his attempt to cement his position in the party are most probably behind the changes in the statute,” Daniel Milo, expert on extremism of the Globsec non-governmental think tank, told The Slovak Spectator.

The renegades complain that they were not aware of the changes planned. Uhrík said he was not invited to the party session where the changes were approved. Other members of the party shared his criticism.

They made it clear that they are not leaving politics, but did not specify their next steps. Observers of the extremism scene in Slovakia expect them to likely start a new party, which would appear to voters as conservative instead of far right on the outside.

Read more articles by the topic
This article is also related to other trending topics: Milan Mazurek