A Slovak oak and a Slovak museum want to be the best in Europe. 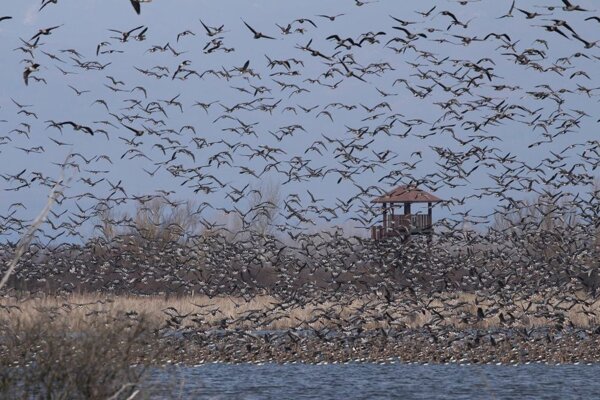 The world celebrated wetlands on February 2. Slovakia has got 14 sites designated as Wetlands of International Importance, with a surface area of 40,697 hectares. In the 2018 photo above, you can see geese from Siberia in one of those areas - Senianske Fishponds located in the village of Senné, eastern Slovakia. (Source: Ľubomír Hrinko/ŠOPSR )
Font size:A-|A+1

Over the past decades, speleologists have observed the melting of ice in the Silická ľadnica cave in the Rožňava district.

“I first visited the cave in 1972 and it was glaciated, there were ice stalagmites and stalactites, ice falls. Since then, ice has been vanishing from there,” Ľudovít Gaál of the State Nature Conservancy – Slovak Caves Administration told the TASR newswire.

Due to lack of ice in winter, which subcools the underground space as it slides down into the cave, the water seeping into the cave during spring rainfalls does not freeze. The same problem has occurred in many other ice caves around the country, including Dobšinská Ice Cave below. 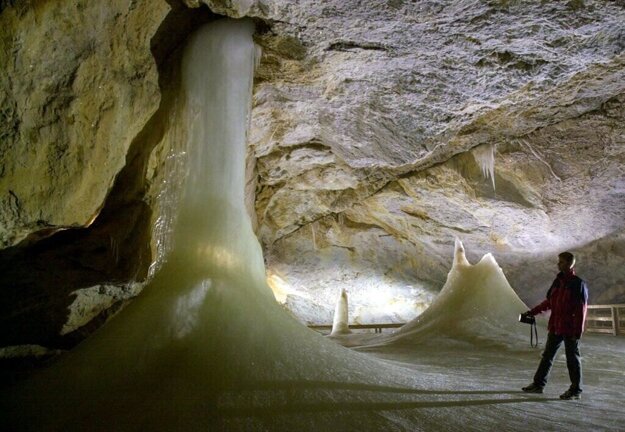 “There is a danger that one day this cave will be completely ice-free,” Gaál said, adding the impact of global warming can be felt.

Silická ľadnica is not open to the public, but from a fenced terrace tourists can still observe its cold underground. Also, the year of 2021 has been declared the International Year of Caves and Karst, which may be a good reason to pay a visit to Slovak caves once they reopen.

Malacky: The centre behind the mountains

Near the town of Malacky, regarded as the centre of the Záhorie (behind the mountains) region, you can explore the ruins of Korlátko Castle. From there, you can also see four wind turbines. The town offers a number of different trails to choose from.

VIDEO: Dominik Janovský, a Kremnica native, created a promotional video of his hometown. Discover the beauties of old Kremnica and leisure-time activities to do in one of the most spectacular Slovak towns surrounded by hills.

Bank of Love up for an award

The extraordinary Banská Štiavnica museum, celebrating love and the ‘Marína’ love poem, has been nominated for the European Museum of the Year Award. The winner will be announced in May, but you can start planning your trip to any of the 27 nominated museums and past winners now.

The Slovak film The Silence (Mlčanie), inspired by the story of one of the last living 1944 Slovak National Uprising insurgents, accordion player Vladimír Strmeň, has won three statuettes at the Independent Shorts Awards in Los Angeles.

The 23-minute picture took home awards for the best foreign language film and the best drama short of December 2020. Juraj Štepka, who directed it, won the award for the best male director.

Although the short film is set in the forties, you will not hear a single shot fired. Instead, Strmeň’s accordion becomes a powerful weapon in it. The picture honours Strmeň and all those who were not silent in pivotal moments of the past.

The Silence is a part of the My Uprising short film series run by the Slovak National Uprising Museum in Banská Bystrica.

Independent Shorts Awards, announced by IMDb, is an international film festival that looks for and awards best short films each month. Monthly winners then compete and are screened at the festival’s annual event.

Director Dušan Hanák, a critic of the communist regime, had to regularly explain to people in power his films did not go against the regime. His films were banned, though. Censors did not like his films for being full of ugly people, who were in fact real people with real problems. Hanák’s films, important pieces of Slovak cinematography, are now available online.

Zdenko, Marián and Táňa are big supporters of Slovak skier Petra Vlhová. They never miss her races, and all must stop when the skier is ready to go, whether in a car or at work. But who is the biggest Petra fan of all?

TRAIN: The town of Medzilaborce, referred to as the Warhol City, will let a retro tourist attraction train drive on its roads and around nearby villages as of May.

LAKE: The pit lake Dolnohodrušský tajch in Hodruša-Hámre near Banská Štiavnica, enlisted under a UNESCO list, has reached its maximum water level after reconstruction ended in 2015.

TREE: An old oak from the village of Drnava hopes to become the European Tree of the Year. Vote here until the end of February.

ART: The town of Kremnica, central Slovakia, is said to open a street art gallery, where it should present works by students and local artists.

BALLET: On navstevnik.online, you can watch the first Slovak ballet Angelika, composed by Eugen Suchoň, on February 5 and 7. Suchoň wrote the ballet as a 17-year-old.

FILM: Two documentaries by Pavol Barabáš won two Edelweiss Awards at the Torelló Mountain Film Festival at the end of January. Salto Is the King recounts the story of friends abseiling the highest waterfalls in the world, Everest – The Hard Way answers the question if one can climb the hardest route to Mt Everest in the Alpine style.

CAPITAL: One of eight Slovak towns – Banská Bystrica, Hlohovec, Martin, Nitra, Prešov, Trenčín, Trnava or Žilina – will become the 2026 European Capital of Culture together with one of its Finnish counterparts (Oulu, Savonlinna or Tampere). In 2013, Košice became the first Slovak city to hold the European title.

COOPERATION: Cross-border cooperation projects between the EU and Ukraine will receive financial aid. Money from the EU will go to Veľký Šariš and Liptovská Teplička.

Kazík: "The joy of music is a real cure"

Robo Kazík, a Slovak singer who rose to fame thanks to the television music program Repete, passed away at the age of 73 earlier this week.

Throughout his career, he recorded 18 albums and more than 250 songs. Songs such as Toto solo patrí nám (This Solo Belongs to Us), Marína, as well as Raz tu, raz tam (Here and There) became evergreen thanks to Kazík’s appearance in Repete, broadcast in the nineties.

“Each of my songs has got a piece of my heart in it,” the singer with a noticeable moustache used to say. He also believed that the joy of music was a true cure, which anyone could take to their taste.

In 1968, he founded the big beat band called The Ice Boys together with his friend Karol Duchoň. Prior to his success in music, the Topoľčianky native had worked in industrial companies and at the Banská Bystrica Town Hall.

That's it for this week. Enjoy the weekend!