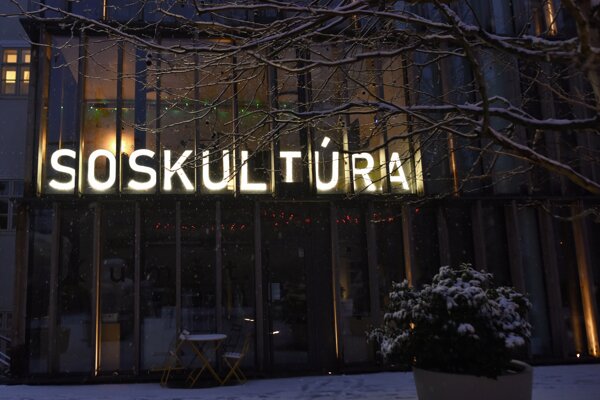 In solidarity with all people working in the creative industries, who have been hit hard by the crisis, a new installation named 'SOS Kultúra' is lit up at the Nádvorie independent culture centre in Trnava. (Source: TASR)
Font size:A-|A+2

The ironisation of Slovak history in a visual tricoloured epic

The White-Blue-Red Epic exhibition, virtually presented by a gallery in Liptovský Mikuláš, explores the key events of Czech and Slovak history, focusing on those bearing a conflict in themselves. Maťátko does not mean to celebrate the winners of history but, through his vision of history and symbols of collective memory, reacts to emptied slogans, raised fists, and other key moments in an ironic manner.

For example, the painting depicting a hand gesture symbolising a victory over communism is cut in half as democracy, according to the artist, is far from perfect decades after the fall of communism.

“Selected personalities and symbols appear here as main actors in history, which are often forgotten, and at the same time not a single historical victory or defeat happened without them,” said curator Beata Jablonská. 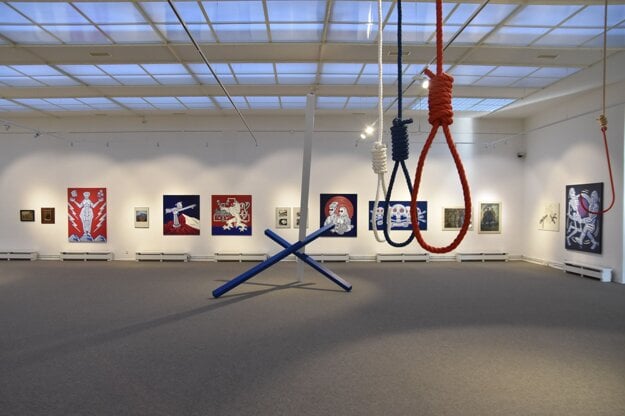 Liptovský Mikuláš is historically one of the most important Slovak towns. The national hero Juraj Jánošík was hung here, and the first Slovak political program, Demands of the Slovak Nation, was drafted here in 1848.

Therefore, one can see tricoloured gallow ropes and hooks – symbols of the execution of Jánošík and political trials – in the virtual site-specific exhibition, which is available until February 27.

Slovak Paradise has turned into a winter paradise

The Slovak Paradise national park does not lose any bit of its beauty in winter. In fact, it is full of frozen waterfalls these days after the freeze of the Hornád River. They can be seen during a walk to the Letanovce Mill hiking area.

Dive into a blog written by Canadian David Zieroth. He will take you into the Old Market Hall, telling you more about its atmosphere, which you should experience at least once when visiting the capital.

Change of heart. No museum in the criticised lookout tower

The controversial lookout tower in Štrbské Pleso has been completed. But it will not become home to the Tatra National Park Museum as promised. Instead, a restaurant in it will expand. 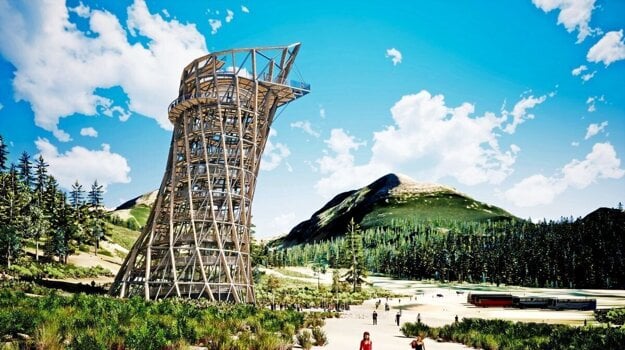 A treetop walkway is being constructed in the Štrbské Pleso resort. Yet, the public was not involved in the debate. (Source: TV Noviny/High Tatras Tower)

Some cross-country skiers do not sit at home

They have taken the opportunity to forge new trails in especially snowy areas, enjoying thus 25 kilometres of trails in Štrba and Tatranská Štrba. Check out some photos of the High Tatras in winter.

After nearly 120 years since first guests arrived at the Thurzo Spa near Gelnica, eastern Slovakia, the area is dilapidated and does not resemble any kind of recreational facility.

The popular spa, once visited by the nobility from Budapest and Debrecen to be treated for nervous system and respiratory system diseases, was owned by the Košice Self-Governing Region (KSK) until 2011 when they sold it to an entrepreneur for €169,000.

Despite promises, the entrepreneur has not renovated the spa to date. Therefore, the KSK now wants to purchase the area back - for double the sum.

“Gelnica is one of the least developed districts, it is one of the hunger valleys of our region,” said KSK chair Rastislav Trnka, hoping to resume tourism and create jobs in the district by investing money in the former spa.

In the past, six spa houses, built in a Swiss style, were liked for their bath treatment using a broth of pine needles. Tennis courts, bowling alley, balls, various performances, and water activities by a nearby lake used to be a vital part of the complex, which began to gradually decline after the First World War.

While the buildings have been in decay, the lake remains a popular destination for locals in summer.

The KSK would now like to renew the spa tradition in the forest area, as well as open a museum, restaurant, and a care home here in the future. The decision is yet to be made.

Félix, a popular zoo bear, will get a nicer home

Júlia Hanuliaková, the new head of Bratislava Zoo, is determined to improve Félix’s living conditions in the zoo. She would like to see the 96-hectare zoo fulfill its potential as well. Visitors may look forward to a ‘safari’ experience, new species and more.

Listen up! A stool sample in a Tesco bag is a big no

One winter, Jeremy Hill was supposed to bring a stool sample into his doctor’s office for examination. Instead of a test tube, he used a Tesco shopping bag. Listen to his account of the day, filled with shame and amusement, when he handed the bag to a Slovak nurse.

A huge hemisphere of wood to complete the New Synagogue dome

Artist Juraj Gábor, inspired by Eastern folk philosophy, decided to use the New Synagogue in Žilina for another project of his, Sphéra. When finished in March, the artwork will form an interior Earth-like installation that will host plenty of events. For now, you can see what the unfinished Sphéra looks like. 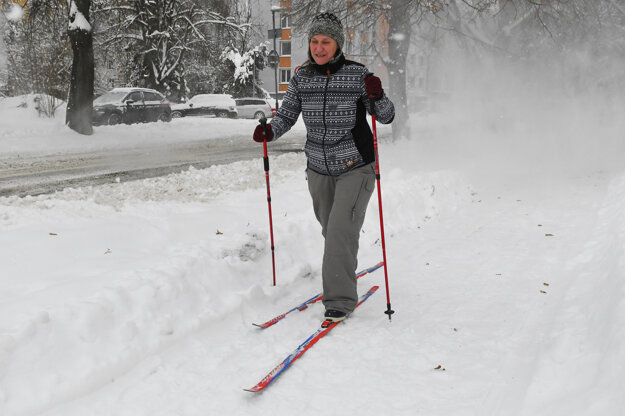 A woman is cross-country skiing on a sidewalk during a snowfall in Prešov on February 11, 2021. (Source: TASR)

We’ll leave you with a bit of new music by Foolk, who released his last single five years ago. Foolk’s real name is Dušan Vančo. He manages a local radio station and a cultural centre in Trnava.

But he is a great musician as well. Some of his tracks were played on BBC Radio 6 Music in the past. His latest EP called 2021 is out now.

That's it for this week. Enjoy your Valentine's weekend!