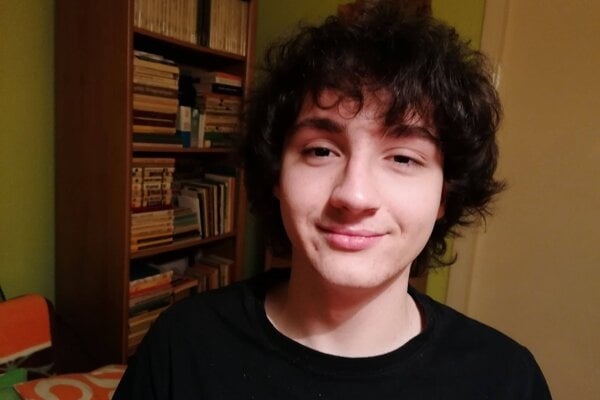 An 18-year-old student from Bilingválne gymnázium P. J. Šafárika in Rožňava, Adam Zoltán Anderko chose the topic "Does patriotism have a negative or positive influence on societies today?". In the essay, he tries to distinguish between the term "patriotism" and "nationalism" because he thinks that it's very important for younger and older people alike to be able to distinguish these two terms and the situations they apply to. His essay was awarded 1st place in Category C.

The year is 2050 and you are one of the citizens of the Patriotic Union of Europe. Under the guise of your nation’s interests, you work long, back-breaking shifts in the car factory in Lyon. The ruling party called the Patriots have started a conflict with the People’s Republic of China and so you have to be conscripted to fight a war that won’t go anywhere for several years until the warring sides sign a peace treaty. You, however, are happy that this is your life, since you, a patriot, would gladly give your body and soul to further the Union.

Even though it might seem like the paragraph above describes a future where the leading power in our society is patriotism, you would be mistaken if you thought that this was the case. The truth is, that the description perfectly fits for a society that runs on nationalism. It is very important for younger and older people alike to be able to distinguish these two terms and the situations they apply to.

Nationalism has been present throughout human history in almost every era. Napoleon used nationalism to puppeteer the French people into loving him to the point where they still wanted him to be emperor even after he failed and was exiled. World War II, the largest conflict in recorded human history, was caused by several nationalistic movements gaining momentum. One would think that after all of this, nationalism wouldn’t be very popular and would be frowned upon. However, the opposite is true. We can see the tentacles of nationalism spreading all over the world even in this very second, for example the infamous Slovakian political party ĽSNS, which regularly gets about 10% of all votes even though many of its members have been found guilty from various hate-crimes and even fascism and the whole party was on the brink of being cancelled by jury. Nationalism was, is and most likely will be present in this world (“President Donald Trump on Monday evening proudly asserted that he is a “nationalist”), the most important thing we as citizens of democratic states can do, is not allow nationalists to take power.

Patriotism is different from nationalism in one key aspect: “Patriotism is of its nature defensive, both militarily and culturally.“It is much more acceptable than nationalism, since it has advantages that aren’t directly or indirectly connected with the exploitation of other countries.

It could be argued that patriotism is needed in our turbulent times, since many nations are divided nowadays (e.g. the United States 2020 election) and patriotism can be one of the few ways to unite a country under one banner. An excellent example would be Great Britain during the WWII, which thrived in such terrible times thanks to a very strong feeling of national unity, which was caused by Churchill’s patriotic propaganda. This is also connected with another benefit - increased productivity and possible increase in public happiness. The fact that it can help with productivity can be proven by historical data and is also logical when you think about the concept of patriotism as a whole:” It is a desire to see one’s country grow and develop whereby citizens can enjoy a higher standard of living. Therefore, patriotism demands good citizenship. It requires that individuals contribute to the well-being of their community and country as a whole.” I was surprised to find out that countries with a relatively high percentage of people with patriotic values and beliefs rank quite high in overall happiness. Three countries out of the first 5 happiest countries on Earth have over 50% of people who think that their country is better than most of the others, these countries being Finland (1st place), Denmark (2nd place) and Norway (5th place).

Even though there are definite benefits to patriotism, not everything is sunshine and rainbows when it comes to it. Any society which bases itself on patriotism is just one step away from the aforementioned nationalism. It does not take much for people to go from supporting their country through their labour to demanding things from other countries. Again, as an example we can look at the circumstances surrounding the second world war and the way The Third Reich went on to demand territory from countries like Czechoslovakia. I think it’s also not too far-fetched to say that patriotism can also create discrimination and feelings of not belonging when it comes to national minorities. Especially nowadays with the European Union and migration being an everyday part of the lives today, in highly patriotic countries, people who have not originally lived in that specific country or they don’t align with its values might be discriminated against by the general populace.

In conclusion, like with most things, there is no particular answer to whether patriotism is good or bad. It is a dangerous tool, but a very useful one. It is to be wielded with extreme caution since it can have devastating consequences in the case that it turns into extreme patriotism or even nationalism. However, it can also help people band together to help their countries in emergency situations. I am very curious to see how it is going to influence our current timeline, for better or worse.