Freedom is truly a double-edged sword 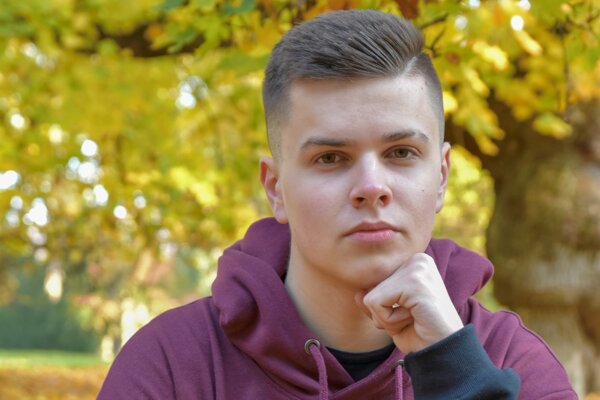 An 18-year-old student from Gymnázium Jana Král´a in Zlaté Moravce, Šimon Kéry chose the topic of "What is your understanding of freedom?" He said freedom is a universal, yet important topic to talk about, making his decision to choose it pretty self-explanatory. He was awarded 2nd place in Category B.

The general definition of the word freedom is the power or right to act, speak, or think as one wants (Oxford Dictionary). In most countries, freedom is granted to people as a birthright. Its concept is anchored in many legal documents and agreements. However, is the fact of having freedom as a birthright even real? Is the general definition of freedom in the modern world even enough?

It is hard to deny the fact that we have the right to act, speak or think, as we want. Let me give you an example. You are completely at liberty, without any legal consequences, to go out dressed like a member of the opposite gender, shout that you think My Little Pony is the best show ever created, while simultaneously thinking that there are 76 genders. That is your right and no one can really take it from you. The fight for this right, which seems so natural and granted to us these days, stretched over millennia. There have always been individuals, braver than the others, which went out and spoke their minds about the freedom of one’s thoughts or religion. As I stated before, many international agreements grant us the right of freedom. Nevertheless, to have the feeling that the freedom given to us these days is just not quite enough. Should not we also be able to do as we like without others telling us that it is simply not right?

Freedom is a delicate topic. Many people share different viewpoints on the matter. Although, it is not always specified, freedom is the main cause behind numerous movements we have seen over the last few decades. Most notable are: the LGBTQ movement and the BLM movement. Both of these groups are asking and fighting for a multitude of changes, however it often all comes down to one single idea – more freedom. I am associated with the LGBTQ movement the most so I am going to use it as an example from this point forward. This movement is much more than just about the freedom of ones sexuality. It is also about the freedom of presenting yourself – your beliefs, ideals, emotions and feelings. It sounds like

a wonderful idea in the concept. Sadly, happening more often than it should, individuals with these unique feelings are being belittled, invalidated and not taken seriously. Why does this have to be such a huge problem nowadays?

By all means, not everyone has to agree with the mentioned individuals. As the right of freedom grants them the right to present themselves, it also gives others the right not to agree with such representations. In other words – a two edged sword. We are slowly getting to the point where I am about to present my idea. However, I have a little more explaining to do. Are you really free if the fear of others not accepting you, some of them even calling you less than a human, is in the back of your head at all times? Do you honestly have the right of freedom if your ideals and background can literally get you killed? It is the truthful and harsh reality of everyday world. A world where your thinking is nearing the point of being controlled, a world where being unique is a rare quality instead of a norm.

Judgements of other fellow Earth inhabitants can hit hard and it can cut deep. Effects can range from lifelong trauma to the fear of ever sharing your thoughts with anyone else. If anyone kept the statistics, the number of people fearing commitment and closeness, just because they have been unaccepted or dismissed in their pasts, would very unpleasantly surprise us. Do not get me wrong. I acknowledge the effort of many organisations that are trying to make the world safer and more accepting place. All I am saying is – if nothing changes, nothing changes. In addition, if we are looking for the right place to start, we should begin with ourselves.

Many would argue that we cannot simply accept everyone, because not everyone has the right opinion. I completely agree with this statement. It all comes down to morals and to the things we deem as acceptable within our society. Nevertheless, I have yet to see a human being with the power to deny someone’s love, to deny someone’s thoughts even though they are not harmful or dangerous. I have yet to see a person who is not my equal.

Therefore, it comes to this. Freedom is not really freedom when there is a certain fear present. You are free to go out during a tornado warning, however most sane people would not do it, simply because they would fear for their lives, thus not being free, quite the opposite, being chained by their fears. It is the same with freedom in the modern age. You are technically allowed to say whatever is on your mind, but many people simply do not, out of fear of being made unequal. Out of fear that others would simply decide there is not any place left for them. However, today, I am here to say, “Screw it.” Today, I am here to ask for a world in which unique individuals do not have to fear about their beliefs. To ask each and every one of you to use your right of freedom in the right way which means thinking anything you want without harming others by your ideology.

Freedom is truly a double-edged sword. Effective when handled rightly, dangerous when used incorrectly. While we are at it, we already established that being free with a fear present does not really mean being free. To sum it up, in my opinion freedom is the power or right to act, speak, or think as one wants, without worrying about not having a place in our society. The fight for freedom stretched over the millennia, but it is not quite over yet. What we had so far is certainly nice, however now is the time to do better; and maybe, just maybe, we can start by looking at what we have in common instead of always looking at our differences. If we can achieve that – well we will see.