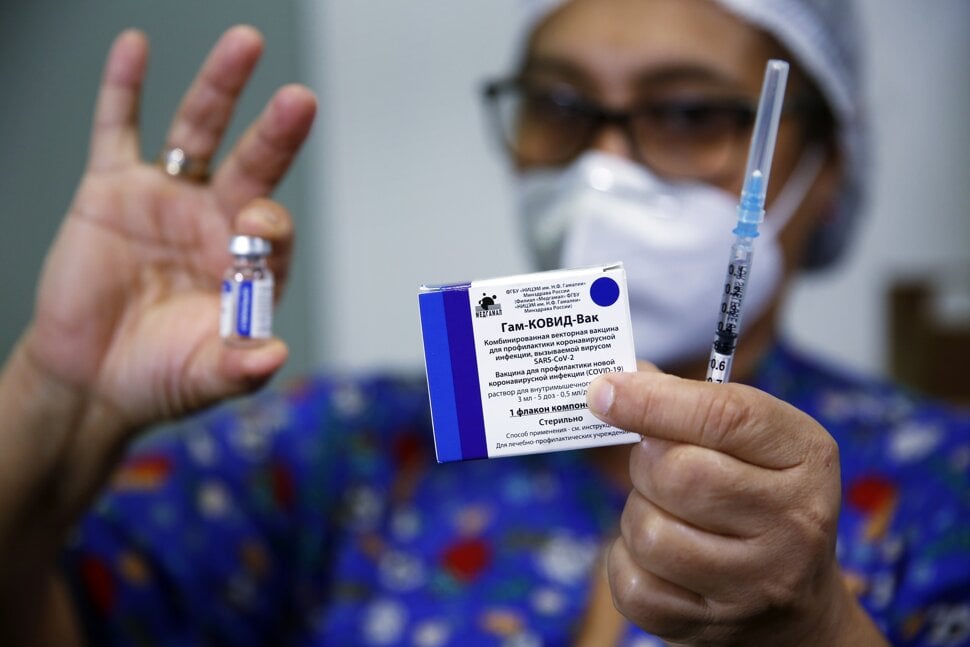 A nurse holds up the Sputnik V vaccine for COVID-19 at the National Hospital as vaccinations start in Itaugua, Paraguay. (Source: AP/SITA)
Font size:A-|A+  Comments disabled

In January, Prime Minister Igor Matovič was still expressing confidence that Slovakia would have enough Pfizer/BioNTech and Moderna vaccines for most of its adult population, and would only use the Sputnik V vaccine if it was approved by the European Medicines Agency (EMA). But by mid-February, he had changed his tune and become a firm proponent of using the Russian vaccine without EU authorisation.

What changed? Rising infections and deaths, poor testing and vaccination programs, dwindling public support, and widening splits in the coalition – all of which has been deftly exploited by the Russian state for its own ends.

Matovič told the media that on January 18 the Slovak government had ordered extra vaccines from Pfizer and Moderna that would enable the state to inoculate 85 per cent of the adult population, or 3.7 million people. The AstraZeneca vaccine was pending EMA approval at that time, but has since become part of the vaccination program in Slovakia when it was recommended for use on January 29. 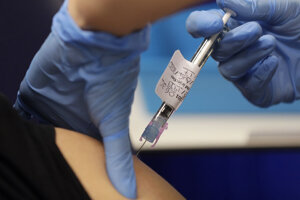 These extra Pfizer and Moderna vaccines, set to arrive in the second, third and fourth quarters of 2021, followed criticism about the pace of Europe’s vaccination procurement, which member states had accused of being too bureaucratic, too limiting to its members and too slow, according to Politico. This in turn was impacting Slovakia’s vaccination program; as of February 24, Slovakia had vaccinated 208,503 people with their first dose of the vaccine and 101,929 with both doses, which in total equates to about 5.7 per cent of the population.

All this was happening at the same time as infections in Slovakia had begun to spiral to the point where it became the nation with the most COVID-19 deaths by size of population in the world at more than 111 deaths per million people, according to Our World in Data.

Against this backdrop, Matovič unveiled his plan on February 18 to purchase Sputnik V from Russia and administer it to the Slovak public without waiting for EMA approval, telling the leaders of the Visegrad Group that his attitude was closer to that of Viktor Orbán in this matter. The Hungarian prime minister made his country the first in the EU to order both the Chinese and Russian vaccines without EMA approval.

“The protection of health and lives cannot be connected with geopolitics, the virus does not choose west or east,” Matovič told the media. “Our obligation is to ensure safe vaccines regardless of where they come from.” 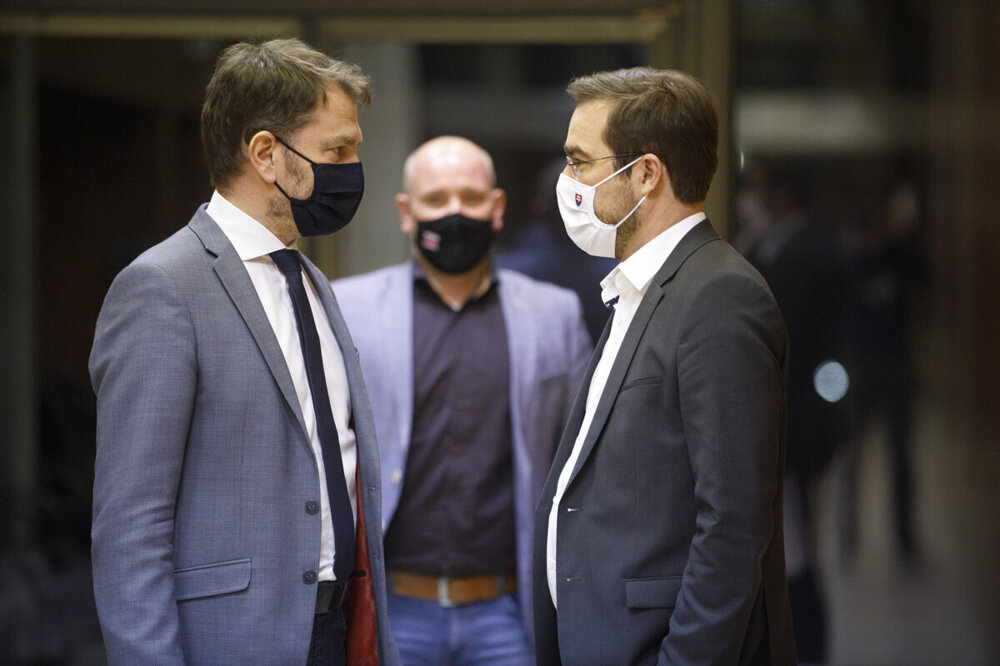 It turned out that, prior to his announcement, the prime minister had already been in talks with the Russian side about obtaining Sputnik V. He described it as “a miracle” that he succeeded in negotiating a contract to buy 2 million doses of Sputnik V, to be delivered to Slovakia by June, with the first supplies of 160,000 to reach the country by the end of February.

But that plan came a cropper when a junior partner in the coalition, Za Ľudí, vetoed the proposal the prime minister put before the cabinet on February 18. Even though Health Minister Marek Krajčí, a member of Matovič’s OĽaNO party, has the power to grant an exception to the vaccine on his own authority – and Matovič publicly supports such a move – the ministry has not yet taken such a step.

One reason for the hesitancy is that in order to bypass the EMA registration process, Matovič needs the Slovak State Institute for Drug Control (ŠÚKL) to verify the safety of Sputnik V, which has already been approved and used by countries such as Hungary, Monaco and Bahrain, and studies have shown has a 91.6 per cent efficacy rate against COVID-19. 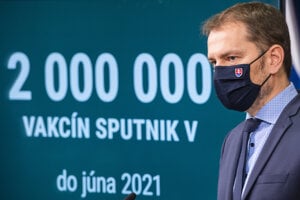 However, Zuzana Baťová, ŠÚKL’s executive director, stated that the institute does not have enough infrastructure to “evaluate vaccines critically, in the full width and depth” on its own. She added there are often 100,000 pages of hardcopy data to trawl through when registering vaccines and the institute’s capacities are not sufficient to handle that.

“The network of experts is built at the EMA level and, therefore, a standard and functional system of centralised vaccine registration should be used,” she recommended.

The Russian vaccine Sputnik V could be given to people in Slovakia in the third phase of the clinical testing, said Health Minister Marek Krajčí. This could be the course of action if the State Institute for Drug Control (ŠÚKL) fails to authorise the vaccine for regular use in Slovakia.

The main reason why the prime minister made a U-turn over the Sputnik vaccine is most likely the unfavourable epidemiological situation in the country.

Pavol Baboš, political analyst at Comenius University, notes how Matovič recently began abandoning the narrative he has been pushing since October, that the nationwide rapid antigen testing is the best tool in the fight against the coronavirus. Now he is leaning toward vaccination as the best means.

Another motivation for the prime minister to reach for Sputnik V and make it part of the public discourse is that it serves as a way to foment conflict within his four-party coalition, which, in turn, allows him to pinpoint a culprit outside of his own party responsible for the unrelenting spread of the virus. 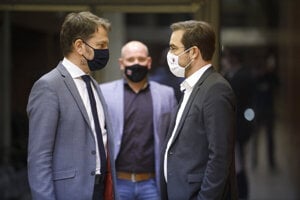 “Igor Matovič seems to have a tendency to interpret things the way it suits him, even if it does not necessarily match the facts,” Baboš says.

While experts in Slovakia, echoed by Matovič’s coalition partners Za Ľudí and SaS, claim that any vaccine can be used in Slovakia as long as it is approved by the EMA, Matovič reaches for a poll conducted by the AKO polling agency that shows more people would be willing to get a jab if they could opt for the Russian vaccine. “They deny people the freedom to choose, they deny them a vaccine they trust and choose,” Matovič railed at a press conference on February 19.

However, the leader of Za Ľudí, Veronika Remišová, has pointed out that the polling in question did not mention that the vaccine would be unregistered. And Radovan Geist of the Euractiv.sk website cautions that the prime minister needs to fully consider the risk that if anything untoward happens, it could decrease the already fragile public trust in vaccination as a whole.

“I do not understand why Russia has not submitted the application to the EMA yet,” Geist says. “It seems like part of a political game.”

On February 22, the official Twitter account of the Sputnik V vaccine declared to its 103,000 followers that the Slovak prime minister supported the immediate authorisation and emergency use of Sputnik V. “Slovakia, what will prevail? The call of PM Matovič to save lives and give people a choice of vaccines? Or a pharma lobby veiled in the calls for bureaucratic unity and delays?” the tweet said.

Analysts say that if Russia really wants to help Europe and Slovakia, it could just submit its vaccine for EMA approval, just as other vaccine developers all around the world have done and are still doing.

By way of explanation, Geist of Euractiv.sk notes that Russia does not have enough vaccine even for its own population, let alone the huge supplies they would need to provide the EU if they wanted to apply for EMA approval and to supply all 27 member states. Indeed, while Slovakia’s vaccination program – widely criticised as not being sufficiently fast – had managed to vaccinate seven out of every 100 citizens by February 22, Russia reported less than half that at three per 100 citizens as of February 10, the last time its Our World in Data website was published. Hungary has also reported that it obtained fewer doses than it had originally ordered from Russia.

Geist suspects this may reflect Russia’s belief that, on balance, it is more advantageous to try to break the unity of the EU’s vaccine procurement by offering the Sputnik to a few chosen countries, rather than to the EU as a whole. 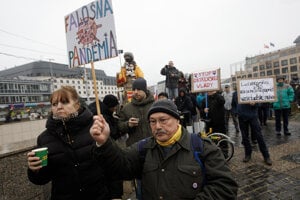 There are two possible explanations why Russia chose Slovakia as one of the countries to dangle the prospect of receiving the Sputnik vaccine in front of it. First, Slovakia is a small country and, therefore, easier to supply – in theory – with the appropriate number of doses: if the Sputnik V producer wanted to supply Germany, the numbers would have to be much greater, he notes. “Second, several polls show that Slovakia is quite vulnerable to various forms of Russian propaganda,” Geist says.

Daniel Milo, a senior analyst at the Globsec think tank, says that from the beginning of the pandemic in March 2020, there have been hundreds of documented cases of official Russian media spreading disinformation about COVID-19. Recently, these outlets have focused on vaccines and try to present Sputnik V as the best and safest vaccine, while exaggerating the rare cases of side effects of other vaccines being administered in the US and the EU.

“The aim is what it has been in other cases: to use whatever situation to paint a picture of the West and its institutions as corrupted and incompetent; and on the other side offer a prettified and idealised picture about Russia and its activities,” Milo says.

Milo bemoans that the whole discussion about the Sputnik vaccine in Slovakia has become politicised, full of manipulation and distortion – whether through a lack of knowledge or on purpose. “Instead of a discussion based on reality and facts, this topic has become a feeding ground for disinformation and various conspiracies,” he sighs.