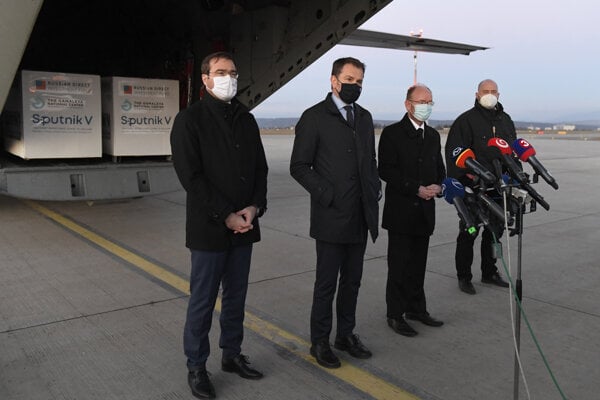 “I’d like to thank Russia for its correct approach. I believe that by meeting the deadlines and promised supplies, Russia will prove that it’s a stable partner we can rely on in these hard times.”

Slovak PM Igor Matovič made this statement when he was welcoming Russian vaccines at Košice airport on March 1. It was tweeted by the official account of Sputnik V.

“We have started to buy SputnikV vaccines from Russia without waiting for its registration with the EMA because we have no time to waste. There are not enough vaccines in the country, every day dozens of our citizens die from COVID-19,” another tweet quoted the PM as saying.

Slovakia's purchase of Russian vaccines is one of the main news stories in Russian media. The Denník N daily reported that pro-Kremlin and also independent Russian media informed that Slovakia became the 39th country in the world and the second in the EU after Hungary that approved the use of the Sputnik V vaccine.

Russian TV Rossija-24 showed an illustrative picture of Bratislava castle and then Matovič’s status “life is important” in Russian. It stressed that supplies from western producers of vaccines are delayed and there are fewer of them than originally agreed.

Some Russian media noticed that Slovakia purchased Sputnik V even though it is not registered in the EU, the Denník N reported.

Several European media reported on the purchase of the vaccines as well. Politico also reported that MP Tomáš Valášek left the parliament in reaction to the vaccine purchase.

The country, which recorded the highest per-capita death rate related to COVID-19 in the past week according to the Our World in Data website, is following Hungary in rolling out the Russian vaccine even though it lacks approval for emergency use in the European Union, Reuters wrote.

Deutsche Welle wrote that the coalition with its chaotic strategies during the coronavirus pandemic has pushed the country into a healthcare emergency.

The coalition is currently at loggerheads over the purchase of Russia's Sputnik V vaccine, which — with the exception of Hungary — has not yet been approved in the EU. Matovič wants to use it but his coalition partners are strictly opposed, DW reported.

Matovič’s coalition government originally rejected a plan to acquire Sputnik V on February 18 after one of his four coalition partners vetoed the move, AP wrote.

“Matovič kept the deal secret, announcing it on Monday only after a military cargo plane with 200,000 doses of the vaccine landed in the eastern Slovak city of Košice,” AP noted, adding that the move will likely cause further tensions in his center-right coalition.