People can rent the pink bikes near the Červený Bridge and head to Železná Studnička. 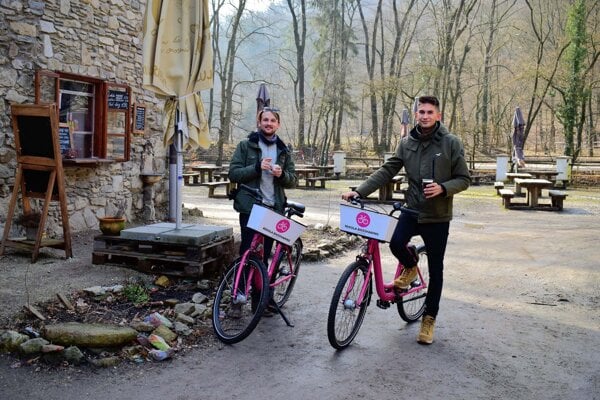 Bratislavans can rent bikes and set off for a trip to the Small Carpathians (Source: Courtesy of Rekola)
Font size:A-|A+27

Rekola, a company running one of the bike-sharing schemes in the capital, has launched a new project for forest bike-sharing. People can now use Rekola's pink bikes in the forests of the Small Carpathians around Bratislava. The initiative has been developed in response to the tightened anti-coronavirus measures and the recommendations that people should get out into the countryside, away from built-up areas. 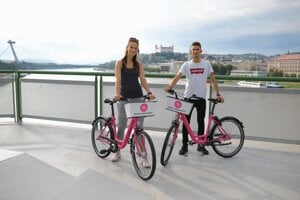 They have moved a number of their pink bikes to the station below the Červený (Red) Bridge, which is a common starting point for bike tours to the recreational area of Železná Studnička, or further into the forests of the Small Carpathians. The route does not lead through built-up areas of the city and thus bikers are not obliged to wear face masks if they keep a distance of five-metres.

“As the road is paved and cars are not allowed here, it is especially suitable for families with children,” said Martin Žarnovický, spokesperson for Rekola, as cited by the TASR.

Bratislava residents can look forward to specially lightened bicycle frames, thanks to which even the less physically fit can used them in the forests. All the bikes are equipped with an uphill gearbox and a large basket for backpacks. After the ride, they can return the bikes to any station within Bratislava, except for the Červený Bridge, for example in Karlova Ves, Dúbravka, Nové Mesto, Ružinov or Petržalka.

The service will be available throughout the lockdown. If there is enough interest, Rekola will consider extending the operation of the forest bike-sharing project through the summer season. Therefore, it is planning to expand the number of stations throughout the whole territory of Železná Studnička.

Rekola considers forest bike-sharing as an unconventional project, as such schemes usually operate only in densely built-up areas as a means of transport intended for short-term distances.

The Czech Rekola project started with recycled bikes which were donated by the public, which is how the scheme got its name - a combination of recycled and the Czech word for wheels which is KOLA, giving REKOLA. Later, its organisers turned it into a standard bike-sharing project and expanded from Prague, to Brno, Liberec and other cities. In launched its bike-sharing service in Bratislava last summer.