President Čaputová to play a significant role in what the new cabinet would look like. 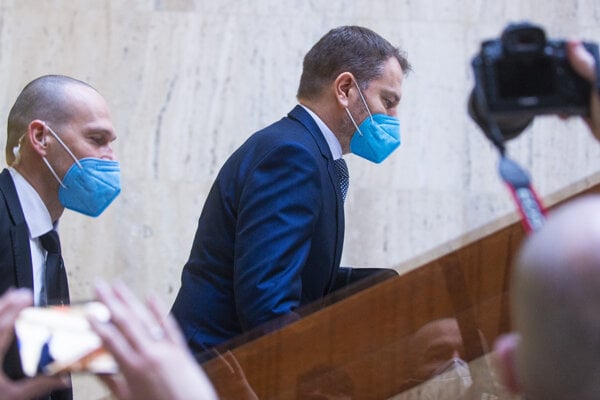 PM Igor Matovič announced that he was ready to resign on the first anniversary of his government. The decision came on the heels of a coalition crisis that has been dragging on for weeks, with the coalition partners and eventually President Zuzana Čaputová, the demands that he step down growing in intensity.

But his announced resignation did not come without a catch. Matovič issued a list of demands as prerequisites for his actual resignation.

Matovič’s cabinet has lost six members so far. Economy minister Richard Sulík and justice minister Mária Kolíková resigned in order to meet Matovič’s demands. Both of them expressed their hopes that their decision would help preserve a coalition of four.

“It is a decision that may contribute to having a better cabinet, to a new style of ruling on the coalition of four platform,” Kolíková told the media after she formally handed in her resignation.

Marek Krajčí (OĽaNO) was the first to resign as health minister. Milan Krajniak of Sme Rodina followed suit, leaving the Labour Ministry's top post vacant, while Education Minister Branislav Gröhling (SaS) and Foreign Minister Ivan Korčok (SaS nominee) announced that they were stepping down on March 24, in line with what the SaS announced when they issued an ultimatum to Matovič that it was his resignation or the party would leave the coalition.

Despite calls from within the coalition parties that the crisis needed to be handled in a timely manner so that the post-crisis cabinet could turn its full attention to dealing with the pandemic-related problems still hitting Slovakia, the crisis has dragged on practically throughout March.

So much so that the March parliamentary session was adjourned in its second week, in what Speaker of Parliament Boris Kollár of Sme Rodina said was his attempt “not to bring this circus to the parliament”. Several pandemic relief laws awaiting the parliament's green light in a fast-track procedure have thus been left waiting.

Kolíková and Sulík both said that they hoped their resignations would contribute to ending the crisis, the only solution to which they saw in Matovič stepping down; effectively meaning an end to his government and opening the way to coalition negotiations on the next cabinet, led by someone else.

“The resignation of Igor Matovič must be taken as a done deal,” political analyst Grigorij Mesežnikov, from the think-tank Institute for Public Affairs, told The Slovak Spectator. Even after weeks of crisis and four ministerial resignations it is not clear when that will happen.

Here is what the country will deal with once the government falls:

With the PM’s resignation, the whole cabinet falls