Sputnik V could have been rolling out in Slovakia for weeks

The evaluation report from Hungary may come just weeks or days before the EMA authorises the Russian vaccine. 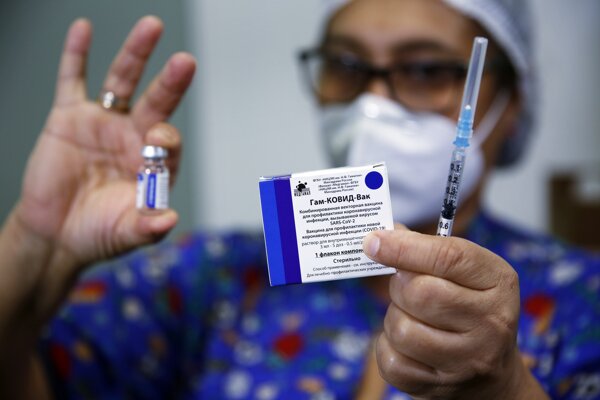 A nurse holds up the Sputnik V vaccine for COVID-19 at the National Hospital as vaccinations start in Itaugua, Paraguay. (Source: AP/SITA)
Font size:A-|A+

The activities of OĽaNO leader, now finance minister, Igor Matovič, around the Sputnik V vaccine were all linked to one declared aim: to speed up the process of adding the Russian vaccine to Slovakia's Covid vaccination rollout.

Yet technically nothing stands in the way of Slovakia using Sputnik V. In early March, then health minister Marek Krajčí (OĽaNO) made the decision to allow the vaccine in Slovakia.

After the Matovič government purchased the Sputnik V vaccine, which has not yet received the green light from the European Medicines Agency, Slovakia had two options on how to handle the 200,000 doses it received on March 2.

The Hungarian solution was to immediately start vaccinating those willing to get the jab.

"Slovakia will be able to speed up the pace of vaccination by more than 40 percent," Matovič said as prime minister when explaining why his government purchased the unregistered vaccine in the first place.

Another option was to wait until the EMA registers the Russian vaccine, which would provide increased guarantees that the vaccine is both safe and effective.

Slovakia chose the third option. Matovič, in cooperation with Krajčí and later his successor as health minister, Vladimír Lengvarský, has been trying to find a way to quickly roll out Sputnik, as well as speed up the process to confirm it can do no harm to those who get the jab.

The EMA is expected to issue its final decision on the Russian vaccine in a few weeks. Slovakia has not received any more doses of Sputnik V, even though Matovič originally announced another 400,000 doses that were expected in March.

It may turn out that the difference between the date when the EMA approves Sputnik V for use in the EU and when Slovakia actually starts rolling it out will be just a few days or a few weeks.

The Sme daily explains in this Q&A why Slovakia still has not rolled out the Sputnik V vaccination.

Is the Sputnik V vaccination forbidden in Slovakia?

Will the new minister launch Sputnik V vaccination in the country?

What has prevented the health ministers from rolling out the Sputnik V vaccine in Slovakia so far?

Will the evaluation from the Hungarian laboratory be sufficient proof that Sputnik V is safe?

When will the EMA decide on Sputnik V registration in the EU?

Is the Sputnik V vaccination forbidden in Slovakia?

No. Vaccinating people with Sputnik V in Slovakia has been legal for over a month.

On March 1, the Health Ministry under former minister Marek Krajčí (OĽaNO), issued the "authorisation for therapeutic use of an unregistered drug" for the Sputnik V vaccine. The minister issued the authorisation as soon as the batch of 200,000 doses landed at Košice Airport, valid until August 2021.