Police officer attacked a homeless person lying on the ground. He stole alcohol, the police explained

Inspection service of the Interior Ministry to look into the case. 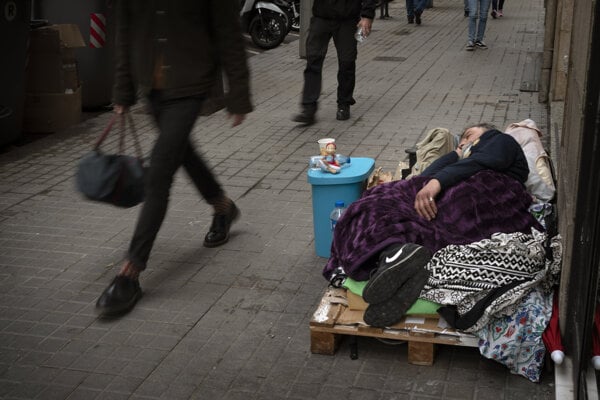 The inspection service of the Interior Ministry will look into the action of three police officers against a homeless man, who had been lying on the ground in front of the Tesco supermarket in Stará Turá (Trenčín Region). The incident was recorded by a witness.

One of the police officers threw clothing from the ground onto lying man. He is shown putting a foot on the man's ribs and then kicking the homeless person, who curled up in pain. Although the man did not try to resist, the police officer grabbed him by the collar, and kicked him again. He then pushed him against the shopping centre's wall, as the Sme daily reported.

“The [homeless] man was aggressive and resisted the police,” said the representatives of the regional police headquarters in Trenčín, as quoted by Sme.

However, no attack against the police officers can be seen on the video.

On the other hand, the video portrays the police officer hitting the homeless person repeatedly, the man bearing an injured face and bleeding ear. The other two police officers only watch the scene.

“This incident is unfortunate and unacceptable in a civilised society,” Miroslav Krč, spokesperson of Stará Turá, told Sme.

Police Corps President Peter Kovařík commented that “the intervention of the police officer really seems to be unsuitable,” but added that nothing is black-and-white