R&D in Slovakia: Peanuts and Monkeys

Tibor Lörincz of Tatra Banka points out that Slovakia's path to a knowledge economy requires many changes and much effort, but the first inevitable step is to start investing in R&D. 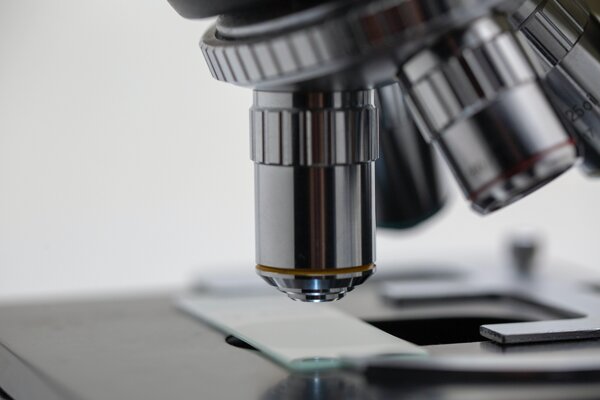 If you pay peanuts, you get monkeys, the saying goes, and unfortunately it describes the research and development situation in Slovakia. Business leaders and consultants throw around buzzwords, such as “Industry 4.0”, “Disruption”, and “Knowledge Economy”, but when it comes to walking the walk, the Slovak R&D is chronically underfunded by both the public and private sectors.

When it comes to innovating the economy the rest of Europe and the world is trying much harder than us. This creates significant hurdles for the future of the economy: 1) no clusters where the economy can increase value added are created; and 2) causes brain drain, where the talented and ambitious move abroad, with the risk of Slovakia being left behind by global competition.

Every year in Slovakia, trade unions, employers, and the ministry of labor begin negotiations about the minimum wage for the next year. And each year, the same argument is presented: high wage costs make companies uncompetitive in the global marketplace, and jobs will be offshored by companies, should they become too high. This argument is most likely true for jobs with low value added, however, when it comes to higher value-added jobs, the relationship is not so straightforward. While Paul Krugman may be currently known more as a liberal pundit than an economist, he was awarded the Nobel Prize for an important insight: trade has gravity and companies like to be near each other and form clusters (case in point: the fourth car producer in Slovakia placed its production plant within 120km of four other car plants, including the one in Hungary). The higher the value added, the more minds are important compared to hands, the less likely is cost saving offsetting the value of proximity, and the more gravity trade has.

Why is it important? Slovakia has, so far, built its economy mainly on wage competitiveness. While this is no mean feat, and Slovakia is much richer thanks to this approach than it was before, in order to escape the Sword of Damocles of wage costs, the economy needs to level up. Unfortunately, Slovakia seems to be walking straight into the middle-income trap.

Wait, the reader may say, what if it is the other way around, that rich countries spend more on R&D? Unfortunately, the list of countries that escaped the middle-income trap is very short. However, the case of South Korea indicates, that the causality runs from higher R&D to a richer economy. From 1996 to 2018, South Korea outspent the EU in R&D as a share of GDP in each year. During that period, GDP per capita in PPP in South Korea grew from 63% of EU average to 96%. While it is not a definite proof, it indicates that higher R&D spending brings along higher economic growth.

Low R&D spending in Slovakia is not only the public sector’s fault. In 2019, the Slovakia’s government and universities accounted for 0.38% of R&D spending as share of GDP, compared with EU’s 0.73%. But it is in fact the private sector, where the difference is more significant. On average, business R&D spending amounts to 1.46% of GDP in the EU, while in Slovakia it is less than a third of that: 0.45%. We may be rightly worried about losing jobs, but we are not doing much to be able to replace them with better ones. 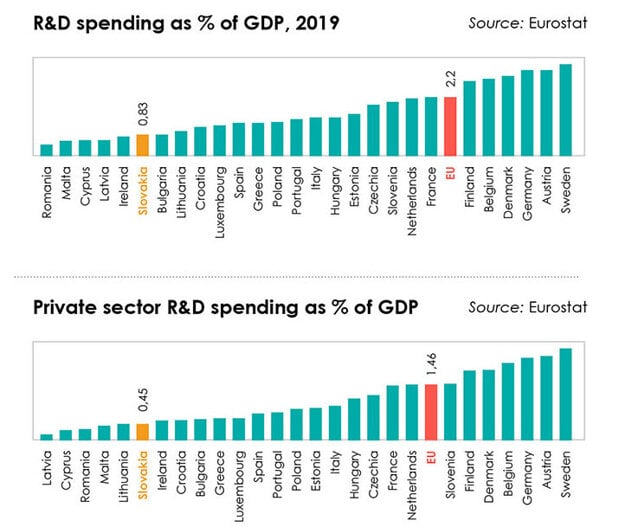 The corollary of trade gravity and companies wanting to be close to other companies is that high-skilled people want to live near those high value-added clusters (think Silicon Valley, or City of London). This poses a chicken and egg problem for creating high value-added clusters: if there are no clusters present in the country, skilled people leave the country and no clusters can be created, because there are no skilled people to build them around. Breaking this vicious circle is going to be very difficult.

Building an innovative, highly productive economy, is a generational project. Slovakia is a country with very little high value-added sectors, its universities are underfunded below EU average, brain drain is a serious problem, and jobs in Slovakia’s economy are most at risk of automation. Much needs to change: from improving higher education, through fostering entrepreneurship, to improving the quality of life. The first step, however, is to stop spending peanuts on R&D, and drastically increase it, both in the public and private sectors. Otherwise, Slovakia’s economy will forever be haunted by the threat of high labor costs, offshoring and the middle-income trap. Not terrible, but definitely not great either.