OĽaNO leader Igor Matovič had cast doubt on Slovakia’s loyalty to its allies, but the Heger cabinet uses an opportunity to do the right thing. 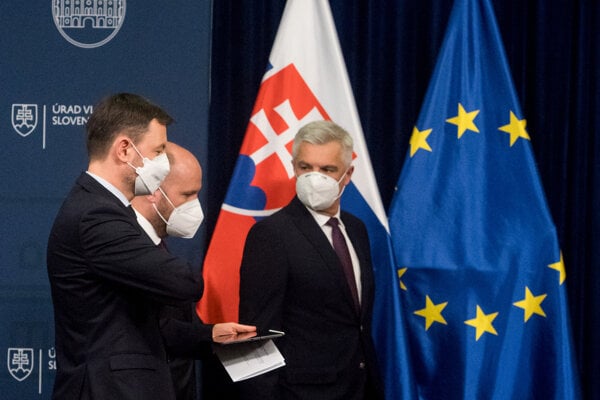 - Bratislava has expelled three diplomats in response to the Vrbětice affair

- Some big steps in the Covid vaccination programme are expected

Slovak government was first to show solidarity with Czechs

If the past few Sputnik-marked weeks had cast doubt on the Slovak government’s loyalty to its EU and NATO allies, the new cabinet of Eduard Heger spotted its chance, arising shortly after it had taken over, to restore the image of Slovakia as a trustworthy partner – and acted decisively.

In contrast to the aftermath of the Salisbury nerve agent poisoning incident three years ago, Slovakia’s actions have followed its words. The country has expelled three members of the Russian Embassy’s staff, echoing the Czech reaction to recent revelations about an arms dump explosion in Vrbětice in 2014 that killed two Czech citizens. PM Eduard Heger (OĽaNO), together with Foreign Minister Ivan Korčok (SaS nominee) and Defence Minister Jaroslav Naď (OĽaNO), announced the decision on April 22. The three Russian nationals, who are registered as diplomats, were given seven days to pack up and leave Slovakia. Russia has promised a “traditionally mirror-like response”.