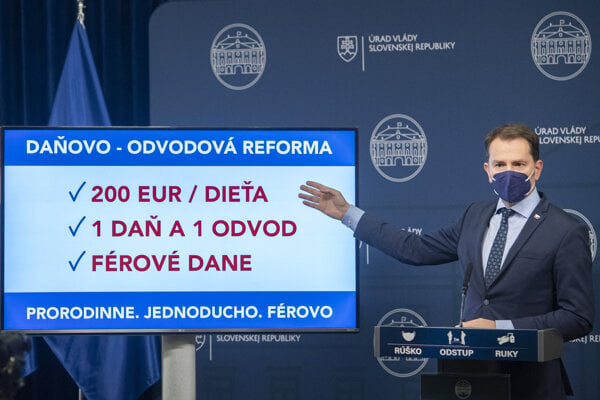 The 19-percent tax, introduced in 2004, was one reform measure that helped Slovakia become the Tatra tiger. The changes and exceptions that followed have however created an intricate system which Finance Minister Igor Matovič (OĽaNO) now wants to reform.

“Slovakia inevitably needs a decent reform of taxes and levies that will be family-oriented, will simplify the tax system and will ensure that all entities paying taxes have the feeling that it is fair,” said Finance Minister Igor Matovič (OĽaNO) on Wednesday, May 5, while promising to present the final draft of the tax and levy reforms soon, probably in a couple of weeks.

The reforms will be based on three pillars: fair taxes, a single tax and single levy and benefits of €200 per child, while Matovič denies any plans to increase value-added tax (VAT) from the current 20 to 25 percent.

Matovič has not discussed the reforms with his coalition partners yet. The junior coalition parties SaS and Za Ľudí have already said that they will not support an increase in VAT to 25 percent.

Matovič plans to replace the current monthly child benefit of about €25 and tax bonus with a new benefit of €200, that working parents would receive monthly until the 18th year of the child. Such a benefit should motivate people to stop working illegally.

The second pillar of one tax and one levy pertains to the current system of income and payroll taxes when the employee as well as the employer pay levies to the social security provider Sociálna Poisťovňa and health insurers. Matovič proposes that employees pay only one tax and one levy from their gross wage. He did not reveal any details of the new scheme.

The Denník E specified, based on a leaked document, that only employees will pay the taxes and levies. The levy should account for 25 percent of the super-gross wage and income tax is expected to be set at 20 percent.

Within the third pillar of fair taxes the Finance Ministry wants to remove the differences between the taxation of various incomes, for example of employees and the self-employed. Matovič sees these as especially dramatic.

The new reform is expected to come into effect next year and Matovič has indicated that its estimated cost will be €2.5 billion.