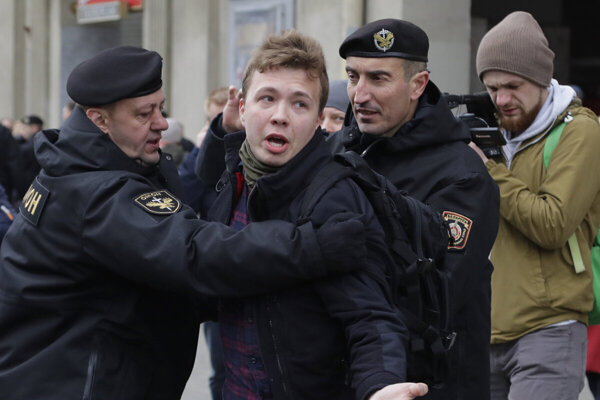 An unacceptable enforced landing of a commercial plane breaches international travel and requires a strong response.

This is how Slovakia’s top politicians responded to the reports on Belarus landing a plane operated by Irish low-cost carrier Ryanair, flying from Athens to Vilnius, to arrest Belarusian journalist Raman Pratasevich, who faces a life sentence or even the death penalty.

Official authorities said this is because of a bomb threat, but no explosive was actually found during the search. Instead, the journalist was arrested.

“I condemn the forced landing of the civilian flight by the Belarusian regime under the politically motivated pretext of a terrorist threat,” Slovakia’s Foreign Affairs Minister Ivan Korčok (SaS nominee) commented. “We request the immediate release of both the plane and all passengers including those unlawfully detained.”

President Zuzana Čaputová called the reports on grounding a commercial plane in Belarus and the subsequent detention of an opposition activist “extremely concerning.”

“Investigation is essential – any violation of international law must have consequences,” she commented.

“It is unacceptable to re-route a Ryanair flight full of civilians from landing in Vilnius into a forced landing in Minsk,” he said. “This is a serious breach of international travel which must trigger a strong response.”

The landing of the plane in Belarus will be one of the topics discussed at the upcoming EU summit, Heger said later on May 24.

“There several options,” he added, as quoted by the SITA newswire. “Slovakia is ready to support any response proposed, including sanctions. Yet we will stress that it’ll be important that the conditions of people in Belarus don’t worsen, and that regular people won’t be cut off from their world.”

“The ministry expressed a fundamental disagreement with the politically motivated step of the Belarusian regime, making a false claim of a bomb threat claim that jeopardized the safety of more than 170 passengers, including EU citizens,” said Juraj Tomaga, spokesperson of the ministry, as quoted by the TASR newswire.

The ministry has also asked for an immediate release of Pratasevich and his girlfriend, as well as an unbiased, thorough and independent investigation of the incident, attended by international experts and just punishment for the culprits.

The forced landing of a plane and the subsequent detention of a journalist proves that “the Belarusian regime has no boundaries when suppressing the rights of Belarusian citizens, neither repelled by gambling with the lives of other countries’ citizens,” as reported by TASR.