Europe, along with the Tatras, had its hottest year

2020 was among the five hottest in Slovakia's recorded history. 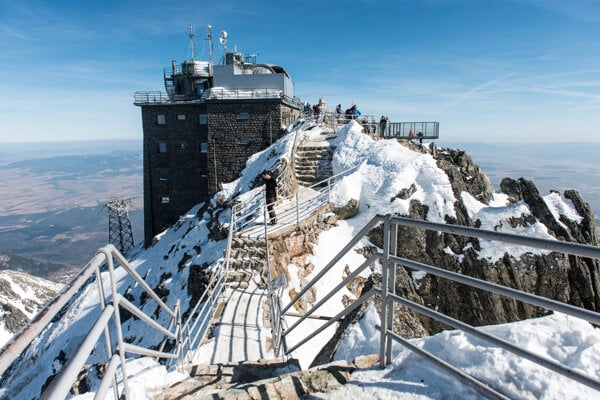 2020 became one of the top three hottest years on the global level over the past 140 years.

The year had a deviation of 1.2 degrees in comparison with seasons during the second half of the 19th century. This information was reported by the World Meteorological Organisation (WMO).

“In Slovakia, 2020 was, according to most meteorological stations, the fifth or sixth-hottest year of all time,” climatologist Pavel Faško from the Slovak Hydrometeorological Institute (SHMÚ) told the TASR newswire.

“The only exception is the Lomnický Štít peak, where 2020 became the hottest year of all time in its history of measurements,” he added.

As the SMHÚ stated on its website, the WMO published its annual report about the status of global and regional climate for the year 2020 at the end of April. It was made together with the European platform Copernicus.

The organisations report that “a large number of extreme instances of weather in combination with the pandemic had a very unfavourable impact on the overall state of the economy and society”.

After evaluating 2020 it is obvious that after all six years from 2015 it was the hottest ever recorded year. The past decade was also the hottest in recorded history since 1880. It is approximately 0.2 degrees warmer than the previous decade of 2001-2010 and a whole 1.03 degrees hotter in comparison to the years between 1850 and 1900.

Europe has faced its hottest year in recorded history. Before this, 2019 held the record of the hottest year, besting the previous record by 0.4 degrees.

At most stations in Slovakia, the hottest recorded year was 2019, according to Faško. At some high altitude stations — like Chopok and Skalnaté Pleso peaks — it was 2014.

“In comparison, in 1980, Bratislava’s Koliba reached an average yearly temperature of 8.3 degrees, but in 2020 it rose to 11.4 degrees celsius. In its hottest year, 2019, the temperature rose to 12 degrees,” climatologist Faško stated.

In Hurbanovo, where the average temperature in 1980 reached 8.7 degrees, last year temperatures reached up to 11.9 degrees, and in 2000, 12.1 degrees, with 2019 also being the hottest year here, recording a temperature of 12.4 degrees Celsius.

Similarly remarkable is the growth of the average yearly temperature on Lomnicky Štít peak. In 1980, it was -5 degrees, and last year -1.6 degrees Celsius.

“On Lomnicky Štít, 2020 was the hottest, owing to its open atmosphere where circulating weather conditions of Europe can manifest themselves,” Faško noted. This means that terrain and other local influences do not have an influence here like in the cases of other local stations.

The WMO report also documents the increasing concentration of greenhouse gases, the increasing temperatures of land and oceans, the increase in the world ocean levels, the melting of ice caps and extreme weather patterns. It highlights influences on economic growth and migration too.

Among last year's extreme weather, the most memorable aspects of it are that it was the historically most active season of Atlantic hurricanes, dryness and fires in California (throughout September) and Australia (throughout January and February) and destructive floods in Asia.

According to the most recent data global warming is increasing in speed. An increase in temperature by 1.5 degrees that was expected to come by 2045 is now expected to come 11 years early, in 2034. With the current progress of climate change, temperatures will rise by 2 degrees celsius by 2054 instead of the expected 2073, which is 19 years early.

Even though Slovakia has been shrouded in cold weather this May, Faška remarked positively that the precipitation deficit has gotten better.

“Although it's cold and awfully windy, it is good that it has precipitated,” added the climatologist.