A secret report is read out in parliament, MPs take an unprecedented step, the smallest party may disintegrate, and Matovič and Sulík scrap as fiercely as ever. It’s been an eventful week in Slovak politics. 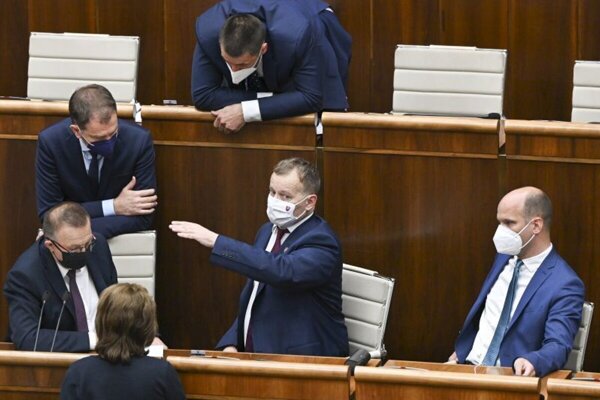 Welcome to Last Week in Slovakia, your weekly commentary and news by The Slovak Spectator’s editor-in-chief. Have a pleasant read.

The many cracks that now divide the ruling coalition

The Heger cabinet has been in office for two months, we’re more than a year into the current parliament’s term and a more relaxed period appears to be in the offing after the deadly second wave of the Covid pandemic. But the dust has not settled following the turmoil witnessed in the first quarter of 2021, and regular political service has yet to resume – in fact, anything but.

The past, very eventful, week has further exposed the many cracks in the ruling coalition, and proved that politics is becoming extremely hard to read in Slovakia. The somewhat mysterious atmosphere invoked by the involvement of the secret services has certainly contributed to that feeling.

In short, after the opposition turned an unusual meeting of top state and law enforcement officials into a hot political topic, parliament convened for an unscheduled session, initiated by Smer leader Robert Fico. Behind closed doors, Parliamentary Speaker Boris Kollár read out to MPs a report by the Slovak Information Service (or SIS, Slovakia’s main intelligence agency) about the meeting, though without any concrete names mentioned. Opposition Hlas leader Peter Pellegrini later told the press that the report suggests there is a group of people in law enforcement that is manipulating the investigation of some major corruption cases.