If you go down to the woods today….watch out for bears! 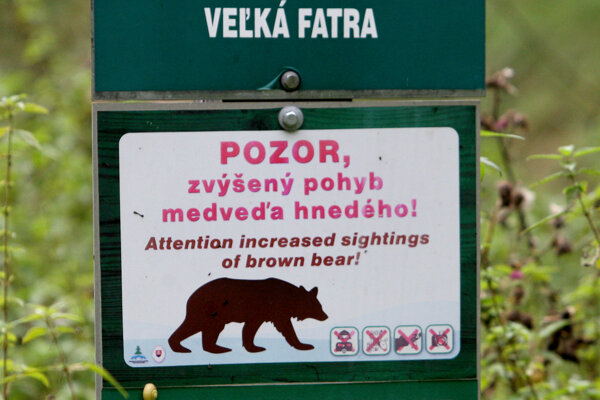 The warning that has recently gone up on the official website of Šurianky, a village in the Nitra Region, is clear and uncompromising: “Under no circumstances should anyone try to approach the bear or its cubs. It is unlikely it will approach houses, but do not leave garbage and food outside.”

It says that the bear seen recently in the vicinity has probably strayed from the forests of the Tribeč mountains and warns people spending time in nearby fields or groves to be careful.

Similar warnings have been posted in other villages in recent weeks.

These came less than a month after conservationists were forced to put down a bear in the High Tatras. They said they had also been monitoring other bears in the region at what is a very significant time for the animals.

“Mating season runs from mid-April to July,” explains Michal Haring, chair of the Brown Bear Intervention Team of the State Nature Conservancy. “A bear tries to avoid contact with people usually, but in mating season, they can be seen in locations where they would not usually appear.”

Mother bears can also often be seen with cubs at this time, as she looks to protect them as males can sometimes kill cubs during mating.

For many years, debate has raged over whether there are too many bears in Slovakia and whether their numbers should be regulated.

The latest data available from the State Nature Conservation Agency, from 2014, showed that there were about 1,256 brown bears in Slovakia. A new study on population numbers is currently being carried out.