The cave includes three types of aragonite formations resembling flowers, hedgehogs and even the Milky Way. 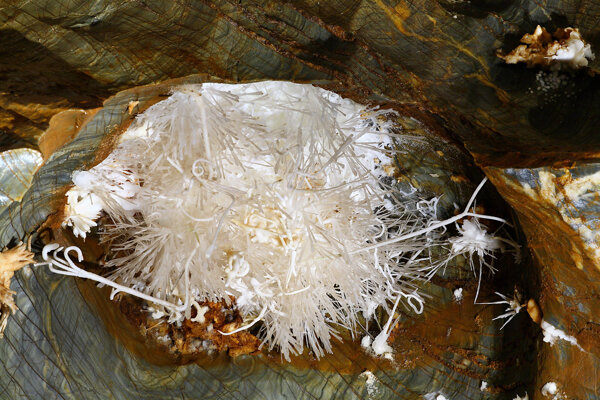 The formations in the Ochtinská Aragonite Cave are from aragonite, a white/brown calcium carbonate material formed only under specific chemical and climatic conditions in a closed underground space.

There are three types of aragonite formations in the cave: kidney-shaped, needle-shaped and spiral and small fans. Together they create amazing shapes resembling flowers and hedgehogs, while some needles and spirals defy gravity.

One of the most beautiful parts of the cave is the Milky Way Dome, on the ceiling of which aragonite needles have created small stars shining in the light of the lamps. Be careful when visiting the cave, as your efforts to absorb as much of the beauty as possible may give you a crick in your neck.

The cave was discovered by chance in 1954 by a geological expedition. Its total length is 230 metres. To get to the cave, take the road from Štítnik to the town Jelšava. The cave is on UNESCO’s World Culture and Natural Heritage list.