The world enters a new age after pandemic outbreak

The future of Europe was widely discussed during the second day of the GLOBSEC Bratislava Forum 2021. 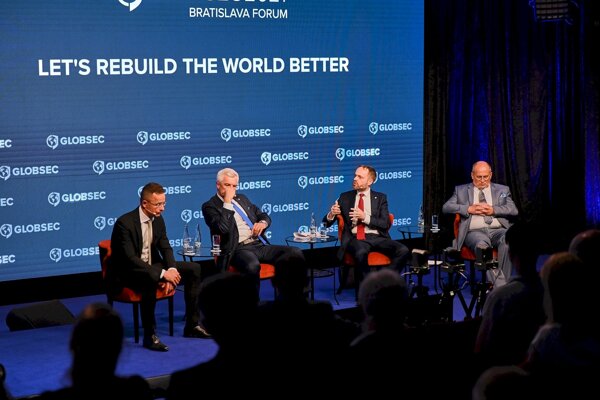 The foreign affairs minister of the V4 countries during the discussion at GLOBSEC Bratislava Forum 2021. (Source: Globsec)
Font size:A-|A+

The entire world has changed in the past 1.5 years, said Hungarian Foreign Affairs Minister Péter Szijjártó during a panel discussion on June 16.

Together with his counterparts from the Visegrad Group (V4) countries, he discussed the pandemic and the future of the EU on the second day of the GLOBSEC Bratislava Forum 2021 conference.

“We are entering a new age, both in terms of global politics and global economy, and this new age starts with very tough competition,” Szijjártó said.

He stressed the need for the EU to be among the winners of this race, both in political strength and economic power. He further mentioned that to make the EU strong, it is imperative to focus on making the member state strong. He believes in transforming the individual strength of member states into the collective strength of the entire union.

His Czech counterpart Jakub Kulhánek agreed, claiming that in the future, he believes that the EU will be as the member states comprise it. While the EU has evolved, we should not forget the hard work and responsibility the member states took on when joining the EU, he added.

Slovak Foreign Affairs Minister Ivan Korčok praised the success story of Slovakia, stressing the role of its EU membership on the path to this success.

“The EU opened the country and provided new responsibilities, opportunities and economic development,” he said. Furthermore, he mentioned the need to address the current issues and the outcomes of unresolved crises before looking into future challenges.

Zbigniew Rau of Poland outlined that there are expectations from the EU. Firstly, that there be a political structure with strong European institutions, helping pursue the interests of its member states. Secondly, a community of cooperation, mutual understanding based on the principle of equality, subsidiarity and proportionality.

EU and the pandemic

The four ministers discussed the future of EU after the pandemic and the lessons learned. Szijjártó claimed that the EU made both positive and negative decisions in tackling the crisis. He believes that the EU was slow in the procurement of vaccines, and added that the institutions are able to lead integration in peaceful circumstances, but leaders are also needed in a crisis.

Korčok did not think that the procurement of the vaccines was slow.

“I don’t think it is appropriate to say that the EU was slow when it comes to procuring vaccines,” he said, claiming that the member states were not prepared for the crisis and despite problems, Slovakia alone would not have been able to acquire the certified vaccines.

Korčok also mentioned the need to identify what kind of competence the EU should have in terms of health.

Kulhánek underlined the need to prepare for any future pandemic as well as the reflection on how and why the EU was so unequipped to address a health crisis of this magnitude.

“As we move forward we should look at the pandemic as lessons learnt, not only as the EU but as member states,” Kulhánek said.

The future of the EU

The panellists also delved into the debate around the upcoming conference on the future of Europe.

“We should look at the EU from the perspective of its citizens, not its politicians,” Rau said, adding that a clearer division of competencies between the member states is also of great importance.

Kulhánek praised the idea of the conference, but believes practical change can occur only when awareness of it is also raised among citizens.

The future of the EU was discussed during other panels as well. Clément Beaune, deputy minister of the French Foreign Affairs Ministry, said that the EU offers many advantages to its citizens, including but not limited to free movement, the euro currency, respect for human rights as well as peace and security.

However, the pandemic has shown that the expectations of the public were set higher than the EU could deliver, especially in terms of speed. Yet, it reflects the communities; “it was a democratic time” as Beaune called it. Therefore, the next two years will be crucial as the concrete deliveries of the recovery plan arrive, which should provide a more digital, more green Europe to future generations.

However, Martin Klus, deputy minister of the Slovak Foreign Affairs Ministry, emphasised that “we need more than just a recovery and resilience plan.”

“If the recovery plan works, it will be easier and necessary to open the discussion on a 10-year investment plan,” Beaune said.

Another panel discussion focused on the positioning of the EU as a global actor and the perception it should deliver. The panellists, including Korčok, agreed that the EU has the means to become a global player and the key to achieve it is a common value-based foreign policy. The EU also needs to carry out a risk assessment and gain the tools and possibility to act unanimously.