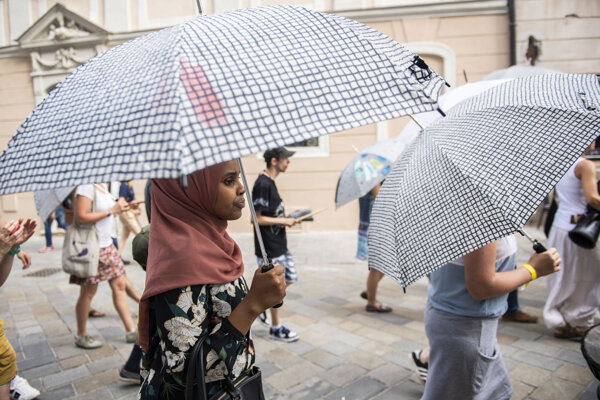 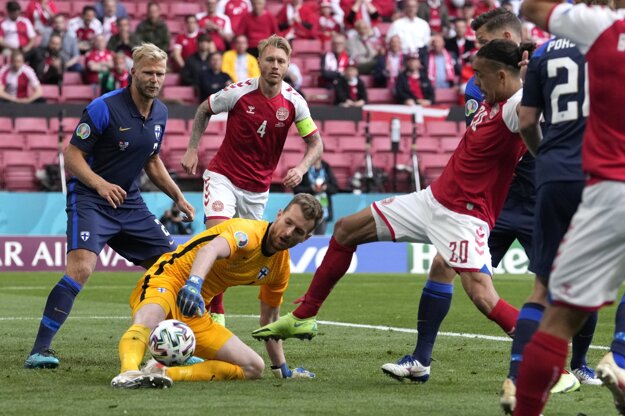 Finnish goalkeeper of Slovak origin Lukáš Hrádecký during a Denmark v Finland match at the Euro 2020 in Copenhagen on June 12, 2021. (Source: Martin Meissner/AP)

Euro 2020: Slovakia and Sweden both driven to win

Slovakia entered Euro 2020 with a surprising win over Poland, while Sweden managed to draw with Spain. Today, Slovakia and Sweden face off at 15:00.

Although Slovakia currently sits at the top of Group E, the country has never beaten Sweden. Both countries have faced off five times before. Sweden beat Slovakia twice with the other three matches ending in draws. The last match, in 2018, ended in a 1-1 draw.

The Slovak team has a strong craving for victory though. A win would help Slovakia clinch a spot in the round of 16. On the other hand, Sweden, for which this is the seventh Euro finals, has not reached the knockouts since 2004. So, both sides are motivated.

Moreover, for Slovakia, this is just its second Euro finals appearance after the 2016 debut when it reached the round of 16, and Slovakia surely wants to do better this time around. The Slovak team has been on a six-match unbeaten run this year, including the surprise win over Poland earlier this week. 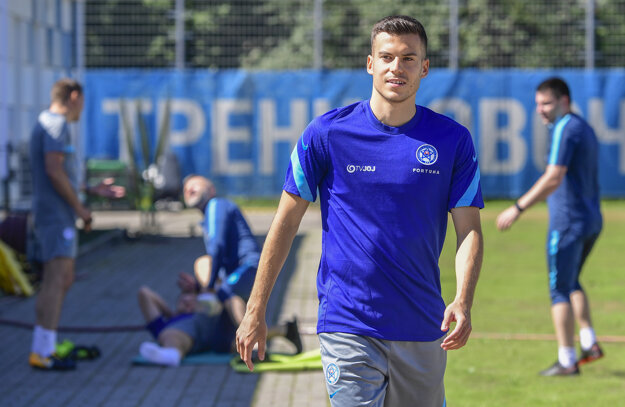 Štefan Tarkovič, coach of the Slovak team, told his players after they defeated Poland that such wins should be enjoyed, but “after five minutes of fame, comes 20 minutes of work.”

The Slovaks will have to watch out for Alexander Isak, who scored in a friendly match against Slovakia back in 2017. He was just 17 years old at that time, and he hopes to beat the Slovak defense again. In the 2017 game, Sweden beat Slovakia 6 – 0. Swedish reporter Sujay Dutt expects Emil Forsberg will assist Isak. Sweden's biggest football star Zlatan Ibrahimovic will not play in the match due to injury, but talented Juventus winger Dejan Kulusevski will boost Sweden's attacking efforts.

"Sweden is about a team with great individuals," said Tarkovič during a Thursday press briefing, adding that the Swedish team's strategy is built on all players trying to dominate the ball.

Although it is not seen as a favourite, the Slovak coach believes his team has a chance to succeed in its second game, although Slovak defender Denis Vavro will not bolster the team after he tested positive for Covid just a day before the match. 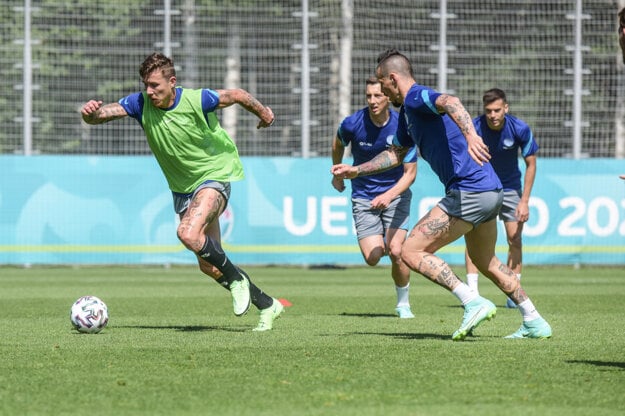 Slovak footballers during a training session ahead of their match against Sweden. (Source: SFZ/Facebook)

The British newspaper Evening Standard predicts that the match will end in a 1 – 1 draw. On the other hand, the SportsMole website expects Sweden to win, adding that “an abundance of goals is not on the menu in St Petersburg, as both teams are capable of packing the midfield.”

You can watch live coverage of Sweden v Slovakia on BBC One starting at 14:45 CET. Slovakia plays its next match, against Spain, on June 23 in the Spanish city of Seville.

Football sing-along: Several Slovak artists have recently recorded songs for the country's national team, including the Iconito group. However, after the win over Poland, it was the folk song "Neďaleko od Trenčína" that footballers sang out loud.

EDIT: Sweden defeated Slovakia 1-0 after Emil Forsberg scored a penalty in the second half of the game on June 18.

"I felt we were better over the course of the match and didn't deserve to lose," Slovak goalkeeper Martin Dúbravka said.

However, the goalkeeper, who made some nice saves in the match, brought down Robin Quaison as the Swedish player ran in on goal, allowing Forsberg to convert the 77th-minute penalty and give his team a victory.

"If they hadn't scored from the penalty we would probably have got a draw, and it would have been a 'golden' point," captain Marek Hamšík said after the match.

He admitted the team was a little more passive in the second half, while Sweden managed to get better.

Slovak Tuscany is yet to be discovered

A beautiful landscape and the arts are the two things for which the Italian region of Tuscany is well-known. For similar reasons, the Slovak region of Turiec has been dubbed Slovak Tuscany. 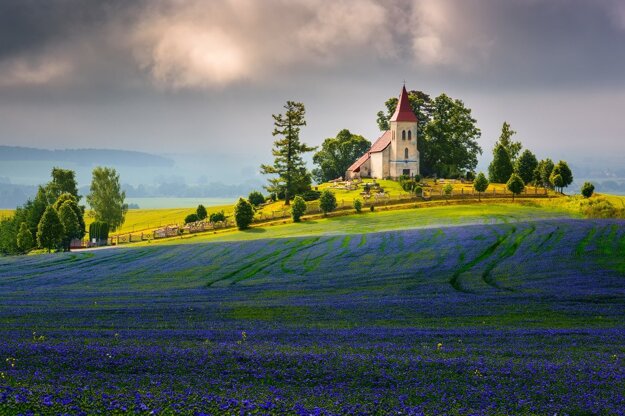 Located in central Slovakia, the region boasts amazing valleys, hills, water springs, plenty of museums, as well as cultural heritage. For instance, the centre of the region, Martin, played an important role in Slovak history.

Listen to a new series of the Spectacular Slovakia travel podcast and set out on a trip around the Turiec region, exploring places you may have never heard of.

For now, you do not need a bike. 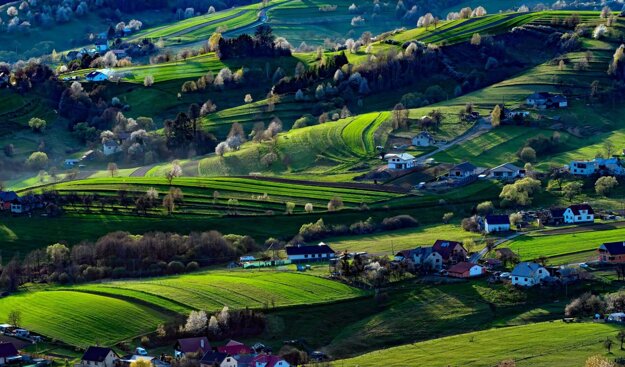 The Asian bush mosquito, which spreads rapidly throughout the world and has been recorded in Austria and Hungary in previous years, has also emerged in Slovakia.

Slovak scientists who monitored invasive mosquito species last year maintain that this species not only affects biodiversity but can also affect people’s health since invasive mosquitoes are excellent carriers of a wide range of pathogens.

The bush mosquito from Asia can transmit viruses that are not yet native to Slovakia, such as Japanese encephalitis, chikungunya, dengue or even Zika, the Slovak Academy of Sciences added. For the area of Slovakia, however, there is a risk of transmission of already circulating pathogens, such as the West Nile virus, which was recorded in the south of Slovakia.

“The places of potential import such as motorways and airports are very important for our monitoring,” Viktória Čabanová, a mosquito specialist of the Biomedical Centre of the Slovak Academy of Sciences, said. 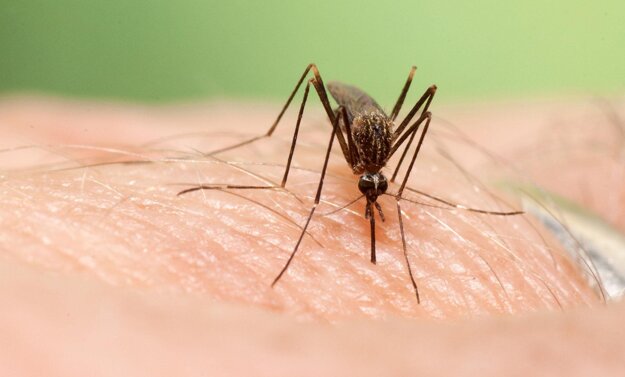 As for this particular species, experts are also monitoring the places it could decide to settle in. The first colonies were confirmed in Bratislava, Zvolen, Košice and Prešov, as reported by the TASR newswire.

"In the native environment, these mosquitoes look for tree cavities to lay eggs, so it is not surprising they look for very similar cavities of different types in new areas,” Čabanová said.

She went on to say that their eggs can be imported to a new place in tires filled with water. In new areas, they know how to lay eggs in any water container. Therefore, the mosquito expert recommends taking care of all water containers, such as buckets, barrels, flower pots, and water fountains by changing the water in them once a week or covering them to prevent the females from laying eggs in them.

Leopard: The Sri Lankan leopard Wanja, aged 17, has died at Bratislava Zoo. He was born in a Dutch zoo and came to Bratislava in 2010. 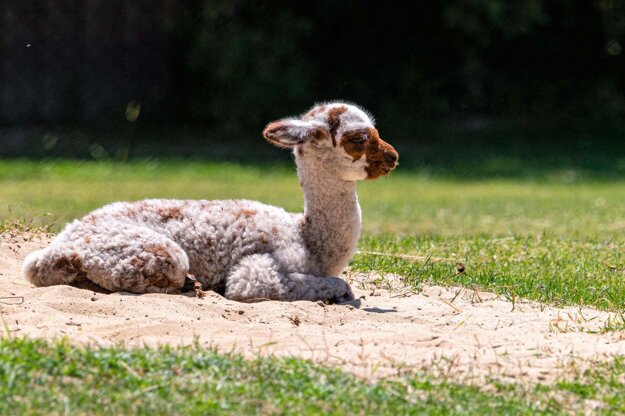 The baby alpaca Salma was born on June 14, 2021, at the zoo in the Slovak capital. (Source: Tomáš Hulík/Zoo Bratislava)

Bear: A man died after a bear attack in the Liptov region. Elsewhere, another bear managed to get into the kitchen of a hotel in the High Tatras. Bears have recently been spotted in other Slovak regions too.

Sand martin: A colony of sand martins is nesting in the Bratislava borough of Petržalka, only a few weeks after the work on the restoration of the vertical bank of the Danube was completed.

Fish: At midnight on Tuesday, June 15, the individual protection of the big catfish, the zander and the Volga zander ended. (TASR)

Bratislavans enjoy Saturday walks the most

The city used counting devices located on important pedestrian routes around the capital to obtain the data. Between last September and the end of May of this year, Bratislava registered almost a million pedestrians and nearly 300,000 cyclists. 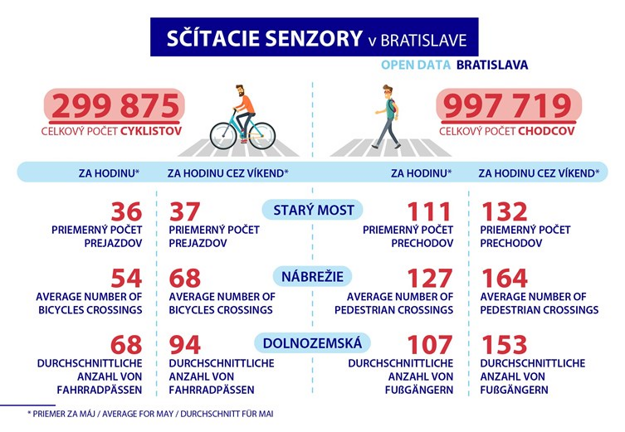 Most pedestrians walked on the Dvořák Riverfront (nábrežie). During the observed period, more than half a million of them passed through there. On the Old Bridge (Starý most), people counters recorded 390,362 pedestrians. One of the counting devices was installed on Dolnozemská Street in the Petržalka borough in late April, recording more than 70,000 pedestrians since. 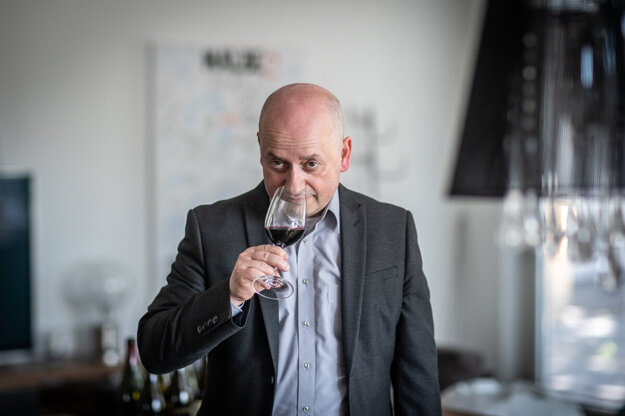 In an interview, he claims that due to high input costs, Slovak winegrowers are only very slowly switching to more environmentally friendly grape growing. Šuták also shares his views on cheap wine, if medals on bottle labels are overrated, and which wines people should drink this summer.

He goes on to recommend four Slovak wines that he considers remarkable.

That is it for this week. Have a lovely weekend. - Peter