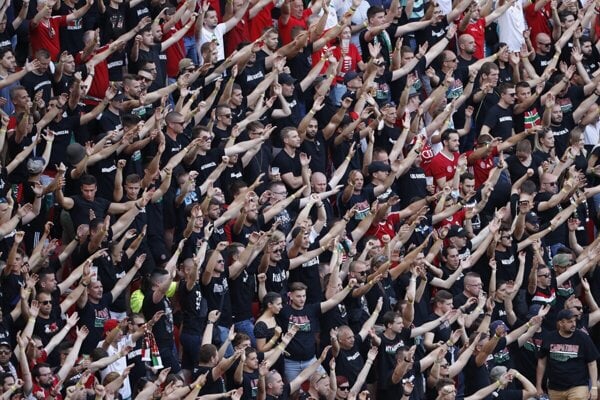 Tens of thousands of fans attended the match between Hungary and Portugal in Budapest. (Source: AP/TASR)
Font size:A-|A+

A crowd of 61,000 people watched the victory of the Portuguese team at the Budapest football stadium. The Hungarian team lost to Portugal 0:3. A person wearing a mask was a rare sight among the audience.

Hundreds of people from Slovakia were among the audience too. So were thousands of fans from Portugal, where the coronavirus infection rate has recently doubled in the course of a month due to the Delta variant.

Portugal's vaccination rate is similar to Slovakia's: About 20 percent of the population has received both doses, while some 40 percent have gotten their first jab.

The Slovak Health Ministry now fears that the match may speed up the Delta mutation import to Slovakia. The variant is believed to be 50 percent more infectious than the British variant that became prevalent in Slovakia last winter.

"We call on the Slovak visitors of the June 15 football match in Budapest to register through eHranica," the ministry wrote. The only requirement for travellers coming to Slovakia from Hungary at the moment is a negative Covid test result, but the ministry now fears that may not be sufficient and wants to offer fans free PCR tests.

The Central Crisis Staff convened on Thursday to discuss new border rules to slow down the import of the Delta variant to Slovakia. The government has warned there may be stricter rules for people coming to Slovakia next week.

Hundreds of people from Slovakia at the match