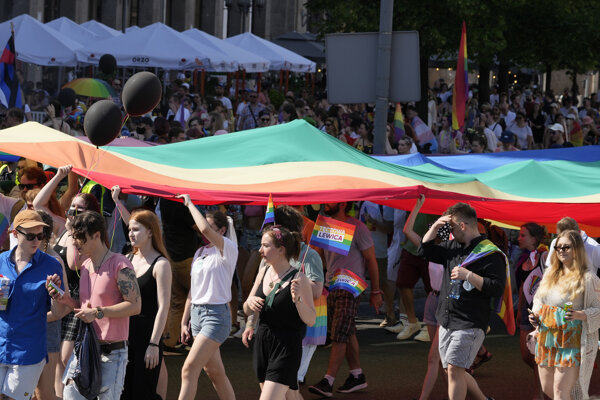 When a popular Slovak brand selling socks, underwear and casual clothing published a picture of two men holding hands on its social media profile, they were showered with hateful comments below the photo in response.

The most polite among them announced that they were done with the brand and would never again purchase anything from Dedoles.

The Dedoles company then decided to take its campaign one step further. While brand advertising campaigns supporting same-sex couples have appeared in the Slovak media space before, the sock-maker has made a move unseen in Slovakia until now — they announced that they would donate €1 for each comment that appears under its posts on Facebook and Instagram marking Pride month. The raised money will be donated to support the LGBTI community through the Pontis Foundation.

“We respect the opinion of every person and we allow opinions to be expressed also via as strong a platform as social media,” Katarína Načiniaková, spokesperson for the company, told The Slovak Spectator. “But unfortunately, there was too much negativity. That’s why we decided to turn hatred into love.”

Through what they called the Rainbow Comments campaign, anyone posting hateful words effectively supports the LGBTI community indirectly. The campaign also prompted people speaking out against hate to partake and many supportive comments have appeared under the posts.

LGBTI rights advocates say that it is important that companies recognise their social responsibility and openly speak out for inclusion, especially now that the pandemic appears to have heightened hate speech on social media.

The maximum volume of the donation is set to €5,000. The donation happens for each comment, regardless if it is positive or negative. People thus started supporting the idea simply by commenting on the posts on the Dedoles pages on social media.