He will arrive in September. 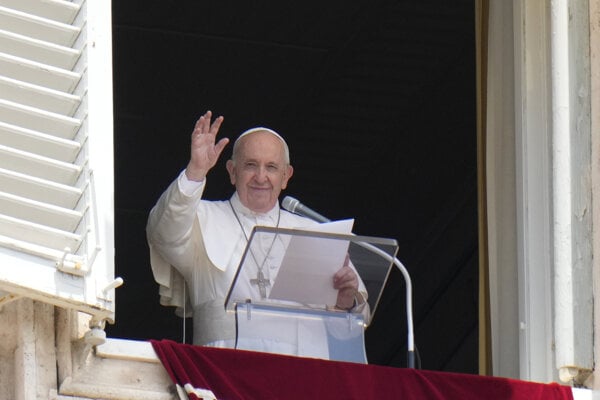 Pope Francis waves to the crowd as he arrives to recite the Angelus noon prayer from the window of his studio overlooking St Peter's Square, at the Vatican on July 4. (Source: AP/TASR)
Font size:A-|A+

Pope Francis is coming to Slovakia.

After the Angelus Prayer on July 4, the pope said he is pleased to announce that he will visit Slovakia from September 12 to 15 for a pastoral visit, the Vatican News website reported.

His trip will begin in Budapest, where he will celebrate the Holy Mass at the conclusion of the 52nd International Eucharistic Congress. Subsequently, he will travel to Slovakia and visit Bratislava, Prešov, Košice and Šaštín.

The detailed programme is yet to be published.

President Zuzana Čaputová believes that Pope Francis’ visit to Slovakia will be a message of reconciliation and hope during the difficult times we are living through. Čaputová invited the pope to Slovakia during her audience in the Vatican in December 2020.

“I’m very pleased that Pope Francis has accepted [my] invitation to Slovakia and confirmed on Sunday that he’ll visit the country in September,” she said, as quoted by the TASR newswire. “When I met with him in the Vatican City in December, he told me that Slovakia is close to his heart.”

The fact that he aims to spend several days in the country proves the authenticity of his words, she added.

Foreign Affairs Minister Ivan Korčok (SaS) called the visit a unique and historical moment for the relationship between Slovakia and the Holy See, as well as for believers and everybody who claims allegiance to Christian and humanist principles, TASR reported.