A new video series takes people to places not many know of. 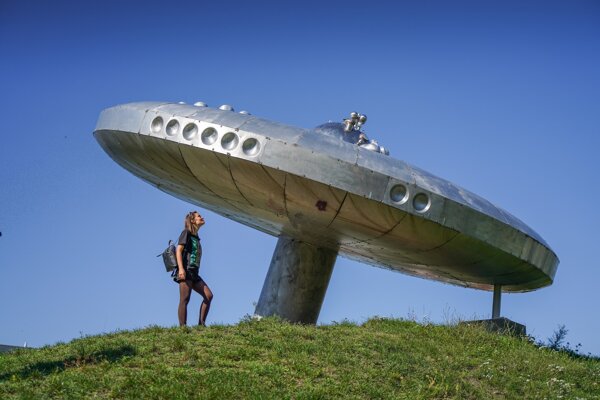 Two flying saucers “landed” in Bratislava in bygone days but only one has attracted crowds of tourists and residents. The Slovak capital is looking to change this.

The well-known UFO restaurant “flies” above the SNP Bridge by the Danube, offering a spectacular view of the capital, while its much older and smaller twin, “hovering” above the ground, hides in the Podunajské Biskupice borough, in the suburbs of Bratislava.

Through social media, the “Turistom vo vlastnom meste” (Become a Tourist in Your Own City) second video series is trying to make little-known sights and places, including the UFO in the Medzijarky locality, created by sculptor Juraj Hovorka, more visible.

Tourist attractions in the outskirts

In the second series, the city will take viewers on short trips around 17 city districts of Bratislava, showing people where they can touch a mammoth’s jaw or in which part of the capital people can find Indian totems.

“The aim of the second series is to support attractions, services and tourist spots outside the centre of the city,” said Vladimír Grežo of the Bratislava Tourist Board organisation.

Viewers will find a number of tips for spending their free time in Bratislava and discovering new, unknown places. The already published videos introduce a forest park as well as several water-linked places in three boroughs - Čunovo, Vrakuňa and Ružinov.

The videos are in Slovak, but foreigners can turn on subtitles on YouTube and pick the auto-translate option to understand the content.

The video series helps to restore the places that tourists look for in Bratislava.

For example, several gazebos have been built and information boards and bicycle stands have been placed around the city thanks to the first series of 15 videos. Some of the spots that have been showcased in the series include Mirbach’s Palace, which now houses the Bratislava City Gallery, and the Natural Science Museum with its 3.8 million exhibits.

Bratislava Tourist Board has promised to continue organising events for its residents and visitors while offering free walking and cycling tours this year.

“Our goal is to show the beauty of all parts of our city, Bratislava, not only its centre,” Grežo said.