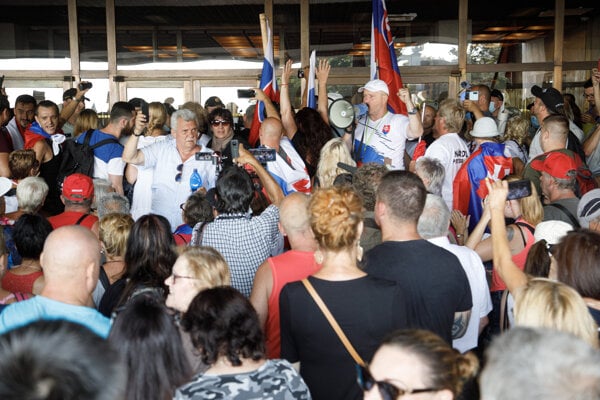 Hundreds of people protested in front of parliament on Friday, July 23, due to the expected vote on new anti-Covid measures.

Amid chants like "gestapo", "give over the parliament" or "high treason", the protesters, who reject Covid vaccination, object to the proposed amendment that will allow the government to draft different measures for people who have been vaccinated against Covid and the unvaccinated. Inside the parliament, MPs held an extraordinary session on July 23 to deal with the amendment. 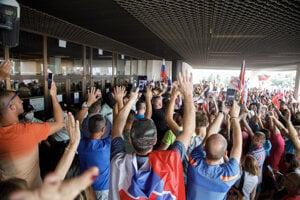 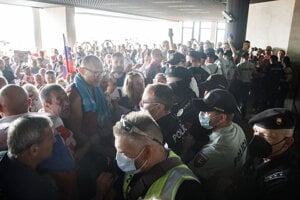 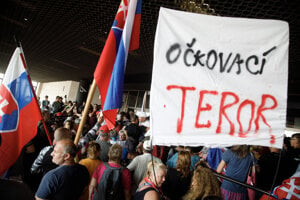 The Health Ministry proposes using the EU Digital Covid Pass as an alternative in the national Covid automat alert system. This means that vaccinated people will be able to use it as an alternative to a negative PCR test when entering certain premises, including restaurants.

The protesters blocked the building's entrance and demanded to be let in. Many of them were not wearing any masks or face coverings.

A special anti-conflict police team has been deployed to the site where hundreds of people are blocking the entrance to the parliament. The police used tear gas when the crowd attempted to enter the parliament, the Sme daily reported.

One police officer has been injured, the Denník N daily wrote, but she did not need to be transported to the hospital. The paramedics treated her on the spot.

The police are continuing to monitor the situation. 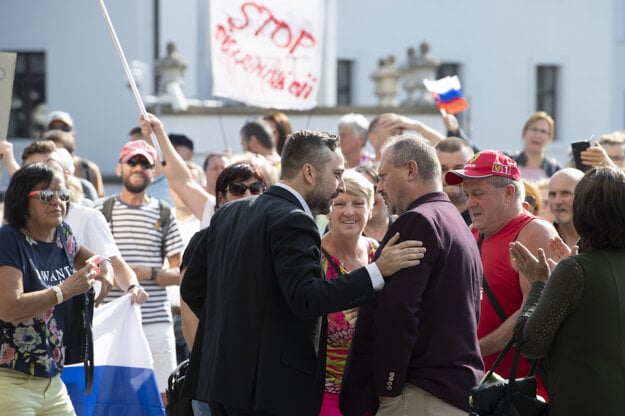 Luboš Blaha of Smer (l) and Marian Kotleba of ĽSNS (r) came to talk to the protesters. (Source: TASR)

Parliament's Speaker Boris Kollár, whose party Sme Rodina has been against dividing people based on their vaccination status, labelled the situation a "fatal failure" of the police and its president, Peter Kovařík. If the police provided barriers and the protest took place at least 50 metres from the parliament, the situation would not have escalated, he said, as reported by Sme.

"Those people, obviously, are fighting against something. That does not mean we should beat them with batons or spray them with water cannons or with tear gas," Kollár said as quoted by Sme.

He confirmed the parliament will hold the session as planned. The MPs will debate the amendment to the law on public health protection, which would enable the Public Health Authority to take the EU Digital Covid Certificate into account when designing the anti-pandemic measures.

Kovařík meanwhile tasked the inspection service to check the actions of the Bratislava regional police at the protest, the TASR newswire reported.

PM Heger: Protests should be calm

PM Eduard Heger (OĽaNO) said that the right to express one’s opinion is part of democracy, but it is important that the demonstrations are calm.

“I understand people are tired of the pandemic and nobody likes the measures,” he said, as quoted by TASR. “But we adopt them to protect the lives of all people in Slovakia, including the protesters.”

The Ordinary People and Independent Personalities (OĽaNO) party has criticised the opposition politicians for supporting the protests and for “trying to win political points from the fight for the health and lives of people,” as the party wrote on Facebook.

Juraj Šeliga of Za Ľudí said that although people have the right to protest, this can be done in a calm and non-violent way. He added that the party will support the law that gives vaccinated people some benefits.

Organisers did not adhere to the rules

The Old Town borough said that the organisers of the protest did not meet the conditions for public gatherings. The protest was to be held in front of the castle wall, farther from the parliament building, the borough’s spokesperson Matej Števove told Sme.

Gatherings cannot be held within 50 metres of the parliamentary building.