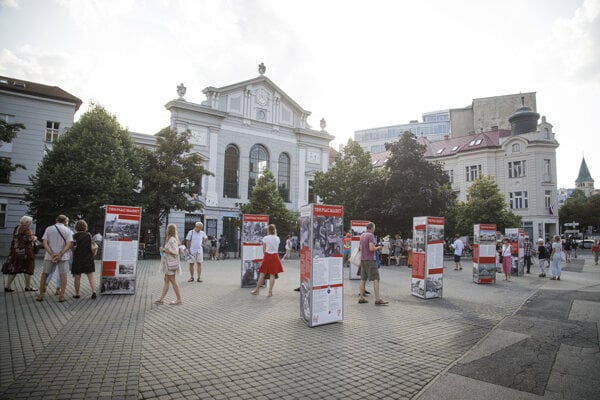 The tradition of Christmas markets in Bratislava dates way before the years after the fall of the communist regime, contrary to typical collective knowledge.

Bratislava's Old Market Hall, or Stará Tržnica in Slovak, used to hold such a market in the 1950s. A historical photo of the market hall invitation for The Winter Market of Dedo Mráz (Grandfather Frost, the Russian counterpart of Santa Claus) proves that. This is a rare photo presented for the first time ever as part of the Trh-Piac-Markt open-air exhibition, Multicultural Space in Pressburg, on markets in Bratislava in general and especially the Old Market Hall.​

​The Bratislavské Rožky civic association, dedicated to documenting and popularising Bratislava's history, prepared the exhibition in cooperation with the Aliancia Starej Tržnice (Old Market Hall Alliance). The Slovak-Hungarian-English language exhibition will be on display at Velvet Revolution Square, in front of the Old Market Hall, until mid-September.

The exhibition takes place on the occasion of the 111th anniversary of the iconic market hall, Sándor Papp of Bratislavské Rožky told The Slovak Spectator.

"The story of this venue shows that even in the digital age, shopping in markets is still fashionable," he said.

Markets in Pressburg, today's Bratislava, demonstrated the coexistence of all nationalities who used to live or work in the city.

How the market hall looked in the sixties